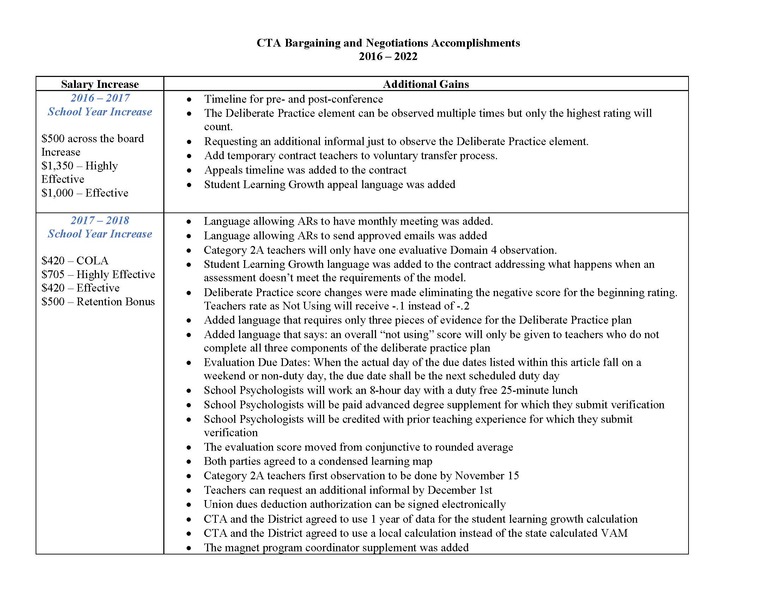 Some misinformation about bargaining has been received in the form of concerns and questions, and false information has also been circulating on social media.

We feel it is important to present our members with the facts. Please see below for corrections and answers and also take time to view the OCCTA's bargaining accomplishments over the last six years.

Reality:  The School Board settled the last contract due to OCCTA declaring impasse. If members had voted no, the School Board would have imposed their decision. Thanks to OCCTA efforts, members of our bargaining unit received a larger increase than what was proposed. We understand teachers deserve more, and we need the state to support increases for all teachers, not only beginning teachers.

Misinformation #2: Out of pocket health care expenses were increased without informing the bargaining unit.

Under impasse the School Board agreed not to raise premiums for 3 years.  Premiums cannot be raised until 2024- 2025.  This is a huge victory since the plan is now in a deficit of 30.44 days or $20.78M as of the last report from the trustee meeting.

The Fringe Committee meetings stopped because OCPS presented changes to the insurance and wanted the committee to agree to make a recommendation to the bargaining team. OCCTA’s position was shared. OCCTA would not approve of any premium increases or increases to deductibles that the District was pushing.  Also, OCCTA did not agree with the committee members making the recommendation because the district would have seen that as our members agreeing to the changes. We refused to be a part of that. There was no need for additional meetings as the intention of the District was clear.  In addition, the committee hasn’t met again because we were at impasse.

Committees (all committees) report to the bargaining team.  No committee makes decisions, but recommendations.  The committee and the brgaining team have the best interest of the members at heart.

Misinformation #4:  The bargaining team does not have training.

Reality: The bargaining team has been trained extensively by experts and has made enormous gains for all members.

Misinformation #5:  The bargaining team agreed to increase the cost of prescription drugs.

Reality:  The bargaining team does not bargain prescription drug costs.  The drug companies set those rates and we have no control over them.  Your best way to lower cost is to write to your U.S. Senator and U.S. Representative.

Misinformation #6:  Members of our bargaining unit have no input concerning any contract changes that are proposed.

Reality: The team uses suggestions from members and ad hoc committees to propose new language. For example the language proposed for Orange County Virtual School (OCVS) came from the committee who model the proposal after Clay County’s contract language.  The counter-proposal made by the District was presented to the OCVS committee chair who approved the changes made by the District.

Every member of the bargaining unit is welcome to submit suggestions to orangecta@gmail.com. 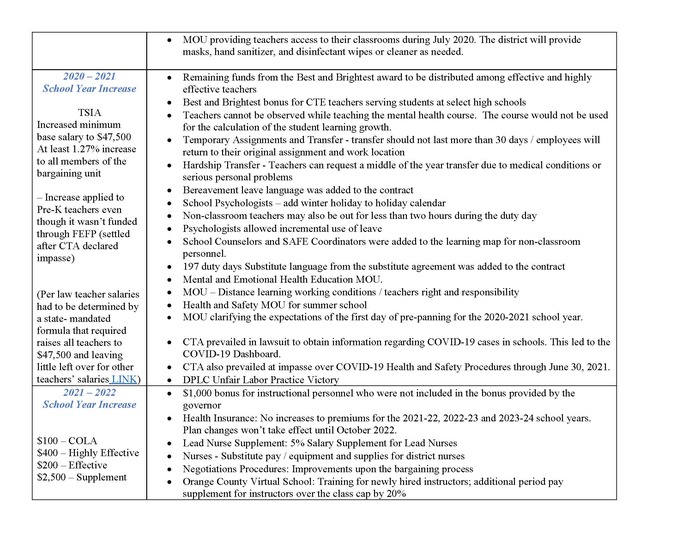