HB 1203/SB 1386 would remove educator voice from the evaluation process and prohibit evaluations from being collectively bargained between school districts and local unions.  Both of these bills passed their respective committees on February 1, 2022, with OCPS lobbyists, Scott Howat and Josh DeGosh standing in favor of them.

"These bills bar us from negotiating teacher evaluation, an infringement on our constitutional right to bargain.

The legislation is retaliation against the Orange County Classroom Teachers Association for the great work they have done to ensure educators’ voices are respected in the evaluation process. As you may know, they won an Unfair Labor Practice claim against Orange County Schools earlier this school year.

In the claim, PERC ruled that Orange County Schools implemented a unilateral change to the evaluation process without bargaining and that teacher evaluations, which are tied to salary, are a mandatory subject of bargaining.

Certain superintendents claim they want to keep things as they are and that this PERC ruling is a drastic change in the evaluation process. We know better than that. In our discussions with the superintendents, they claim to believe the evaluation process should be collaborative while insisting they should have sole authority over a final decision on the process if there is a disagreement. It is disappointing that superintendents would rather focus on their power than the massive teacher and staff shortages impacting our schools."

On Tuesday, February 1, 2022, the House Early Learning and Elementary Education Committee considered HB 1203, K-12 Personnel Evaluation Procedures and Criteria by Rep. Elizabeth Fetterhoff (R-DeLand). HB 1203 would eliminate the ability for locals to collectively bargain teacher evaluations. Unfortunately, neither the sponsor nor the committee members seem to understand the process of negotiations in developing the teacher evaluation processes.

At the hearing Rep. Andrew Learned (D-Brandon) discussed the recent Orange County PERC finding and asked the sponsor to clarify how it would be possible to collectively bargain salaries but not evaluations, as the two are tied via performance-based pay. Unfortunately, the bill passed by a vote of 12-5. House leadership recently removed the bill’s second committee of reference, fast tracking the bill and leaving only one stop before it is considered by the full House.

As FEA stated, this bill is directly tied to the fact that OCCTA prevailed in an Unfair Labor Practice with PERC ruling that evaluations MUST be bargained. Read more about that here: /UNION-WINS-EVALUATION-ULP---District-must-bargain-evaluation-system--6-20126.html .

Listening to Superintendent Jenkins at the February 8, 2022 School Board meeting was very disappointing. (Read the transcript of the Superintendent's statement at this link.) Once again she was not forthright in explaining her role in the legislation that will deny teachers a voice in their evaluation system.  Her spin was misleading:

The superintendent would have the school board members and public believe that OCCTA was responsible for the stalling of revision of the evaluation system. The reason OCCTA filed an Unfair Labor Practice was because after months of evaluation committee meetings, the district rejected OCCTA's proposed changes and tried to impose an evaluation system that they unilaterally devised without input from teachers or the union. It was disingenuous of the superintendent to claim our ULP stalled the process of bargaining the evaluation system.  Also delaying the ULP was a major hurricane and pandemic which caused cancellations of the hearings. Since 2018 OCCTA demanded to bargain the system or parts of it many times, as our bargaining minutes reflect. The district refused to bargain, stating falsely that they could not bargain if an unfair labor practice was filed. It was actually the district that deliberately held up the process. It was the District that was in the wrong, as the PERC ruling verified. See this link: /UNION-WINS-EVALUATION-ULP---District-must-bargain-evaluation-system--6-20126.html . 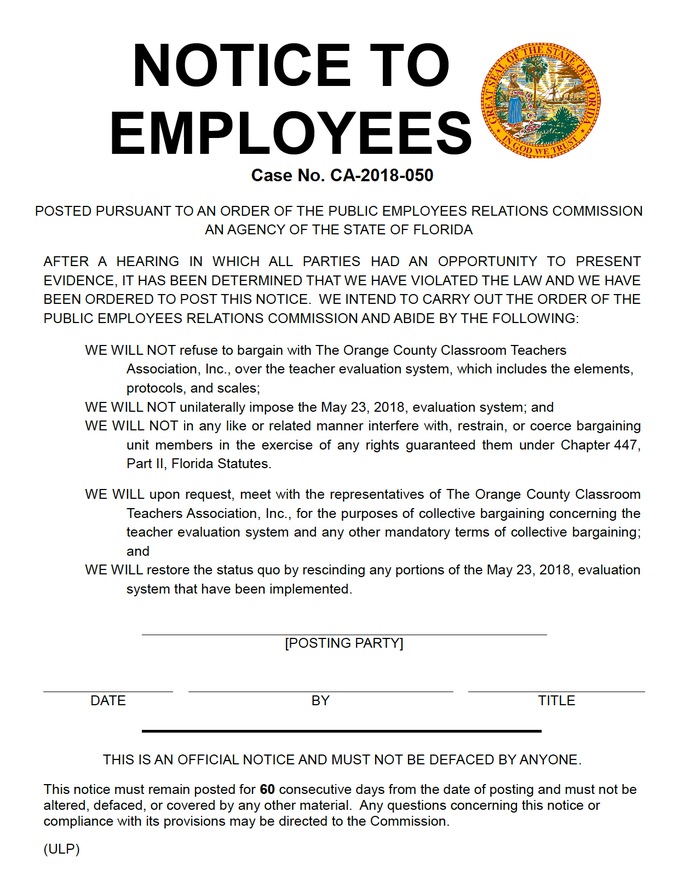 The superintendent's  school board remarks violate the PERC Commission order. The District should bargain with the Union, not merely have meetings with "select" teachers.

You often hear District Attorney John Palmerini and the superintendent allege in an accusatory manner that OCCTA files too many unfair labor practices, declares impasses too many times, and files too many grievances and other actions.  This is an absurd allegation.  It is because OCPS constantly violates the contract, labor law, Florida statute and FLDOE policies that the Union takes action to protect members' rights and uphold the law. The District has been found at fault, as the rulings testify.

Jenkins stated: “Other Superintendents were alarmed when PERC ruling came through; they saw it as an immediate breach of statute, that was concerning. DOE was concerned. So we don’t determine whether or not PERC got it wrong or right that is left to the legislature.” It was reported to the Union that Superintendent Jenkins shared OCCTA’s ULP win with the Florida Association of District School Superintendents (FADSS) who joined Orange County in backing the bill. Neither Orange County Public Schools nor the FADSS had this legislation as a part of their 2022 Legislative platform, yet both organizations are on record as supporting the legislation.  (Read the OCPS 2022 legislative platform: https://www.ocps.net/cms/one.aspx?portalId=54703&pageId=1107037 and the FADSS 2022 legislation platform: https://fadss.org/_docs/_content/2022%20legislative%20platform/FINAL%202022%20FADSS%20Legislative%20Platform%20112921.pdf .)

The superintendent wants the school board and public to believe "another superintendent" was behind the introduction of this  bill. However, we were told Orange County Public Schools  is clearly the District that is responsible for this bill's introduction.  Again, OCPS had two lobbyists in Tallahassee on February 1, 2022, speaking in favor of the bill on the date both bills were heard in their education committees - Scott Howat and Jason LaGosh.

Jenkins stated the “legislature will decide. ” There is no need to have legislation EXCEPT to end the bargaining rights. The current legislation 34 states: (1) EVALUATION SYSTEM APPROVAL AND REPORTING.— (a) For the purpose of increasing student academic performance by improving the quality of instructional, administrative, and supervisory services in the public schools of the state, the district school superintendent shall establish procedures for evaluating the performance of duties and responsibilities of all instructional, administrative, and supervisory personnel employed by the school district.

We were told that Jenkins and Palmerini went the legislative route in case the District’s court appeal is unsuccessful. The District surely may lose in the court appeal, as the District lost in the courts in OCCTA’s DPLC Unfair Labor Practice. The District has NOT bargained the evaluation system in good faith. That is why we filed an Unfair Labor Practice. The superintendent claims they now are finally ready to look at a new evaluation system (We started that process in 2016 and the District stopped it.) She stated Vazquez will lead an effort to organize and  meet “large groups of teachers in meetings. (direct bargaining). She stated she will “also include recommendations from the union.”

The system needs to be bargained. Evaluation directly impacts teacher pay. The District should not merely be asking for input from hand-picked teachers. The examples below are aspects of the evaluation system that are currently bargained, but if this legislation passes we could not bargain:

Would you like this added to Domain VI? This example is from the system the District tried to impose in 2018, but OCCTA stopped with the Unfair Labor Practice.

Are you up for having more data requirements added to your plates? The above example is from the system the District tried to impose in 2018, but OCCTA stopped with the Unfair Labor Practice.

Would you like the District to have parents rate and evaluate your teaching skills? We currently have Moms for Liberty and other groups demanding parental rights. If we lose our right to bargain the evaluation this could be a reality.

The superintendent bragged about the District being “generous to our teachers”. She stated, “Also want to make sure the board understands when we bargain those particular items, we have not been at all concerned about being generous to our teachers. They work hard every day - 88% are highly effective under the current and 8% are effective 3% can't be evaluated for various reasons. 1% it’s in a needs improvement category I'm sorry, less than 1%”  Why do we have this high rate of highly effective teachers? It is not because of the District’s generosity! It is because of Union advocacy fighting for the reform of the evaluation system. that it was changed.  Letters to the editor, speeches at school boards and calling the District out publicly were responsible for the highly effective rating moving from the 2.4% of OCPS teachers being highly effective to 88%. It was not because the District was generous. We had to fight for this, just like we have to fight for all of our other rights.

And one other point concerning the fact that 88% of OCPS teachers being highly effective - to get that rating teachers have to spend many hours past their contracted work week to complete evaluation-related tasks.

This dangerous bill will drive even more teachers from not just OCPS schools, but from schools across the state.  How sickening that our District leaders are the ones who took action to deny all of Florida teachers their right to bargain the evaluation system that impacts their pay.  This will be Dr. Jenkin’s legacy.

February 16, 2016 My Word Column by Wendy L. Doromal about the need to reform the evaluation system: