Dashboard Transparency and the Never Ending Battle for COVID-19 Information

Orange County Public Schools has a reputation and history of being non-transparent, refusing to disclose information, and charging outrageous record requests fees, not just to the Union, but to media outlets, parents, and others. Having real-time information became especially important when the pandemic began.

In July 2020, OCPS District attorney, John Palmerini falsely claimed that the Union did not have the right to know the names of the schools and worksites where there were positive COVID-19 cases.  To be clear, we were not requesting the names of employees or students or any private or confidential information, we were merely requesting the names of the sites where positive cases of COVID-19 had been identified.  This information was for the purpose of providing vital health information to teachers, staff and parents so they could make proactive decisions about their health.

Since the beginning of the pandemic we had been hearing from teachers who were on chemotherapy, who had transplants, or who had compromised immune systems. We were hearing from teachers who had family members at home with health conditions and they feared getting COVID-19 and passing it on to them. They wanted to know where there were positive COVID-19 cases to protect their health and the health of family members.

On July 31, 2020, OCCTA filed a lawsuit against Orange County Public Schools regarding the School District’s failures to keep students, staff, and the community safe during this COVID-19 pandemic, and the District’s refusal to be transparent and turn over public records OCCTA has asked for on behalf of educators and children regarding the safety of the OCPS community.

On August 17, 2020, Judge Donald Meyers, Jr. ruled in favor of OCCTA and ordered OCPS to turn over "a list of names of all worksites where there are and/or have been employees, students, visitors, vendors, or any other individuals who have tested positive for COVID-19 since June 1, 2020 . . ." The order called for the District to turn the documents over to OCCTA within 48 hours of the August 17, 2020 hearing. (Read the Final Judgement at THIS LINK.)

The District not only failed to meet the judge's deadline to turn over information, but turned over an incomplete and convoluted record to OCCTA. The record contained the names of 192 schools and worksites. It also contained hundreds of names of job descriptions and departments rather than the names of the worksites and schools. After a local media outlet published the incomplete list, teachers and parents contacted OCCTA to inform us of names of schools and worksites that were omitted from the record.

OCCTA attorneys contacted OCPS Attorney John Palmerini on multiple occasions to demand the correct information. Finally, on Monday, August 25, 2020, six days after the records were due, Mr. Palmerini sent OCCTA another incomplete set of records. You can read more at THIS LINK. Finally, the District partially complied with the order by sending OCCTA pages of messy redacted records.

To their credit, OCPS instituted a COVID-19 dashboard to comply with the court order and so that employees, parents and community members would be able to know where the positive COVID-19 cases and quarantines were in live time in order to make proactive health decisions.

OCCTA attempted from the start to collaborate with the District to make improvements to the dashboard so users could more easily get accurate and real-time information.  Initially, to locate where there was a positive case or quarantine, on the dashboard, you would have to click every single school or work location to see where a case was.  That meant going through over 200 sites in a very time consuming search. I pointed out that other District's dashboards listed schools and work locations with positive cases daily and broke down the numbers by employee and students in a easy to scan list. OCPS refused to make changes even after we showed examples. I even offered tech help after they claimed it was not possible. I consulted with FEA IT experts and others who claimed my ideas were an easy fix.  After months of complaining, the District changed the dashboard to one that is better, but is still burdensome and difficult.

The parties mutually agree as follows:

All of OCCTA's suggestions were rejected at every Joint Safety Committee Meeting. These meetings were used as a check box for the District. OCCTA committee members were mocked, lied to and our suggestions were ignored or consistently rejected. Although the 2021 Health and Safety MOU stated that the District had to give 10 days notification to OCCTA and confer with OCCTA before making changes to the District's unilaterally created COVID-19 Procedures Manual,  the District failed to follow the guidelines on more than one occasion. Twice they unilaterally changed the manual without notifying OCCTA. Please read more at THIS LINK. This is why we need an enforceable Health and Safety MOU!

At one meeting  LeighAnn Blackmore very rudely stated, “The MOU says we will confer, not that the District has to accept any suggestions.”  Read the transcribed Safety Committee Meeting Minutes at THIS LINK .

Finally, when the District could no longer use the committee meetings to their advantage, they stopped having the meetings altogether.  The last meeting was in July and was scheduled to be hosted by OCCTA. We had bargaining prep and could not attend. The District continued the meeting with our entire team absent.

Since the dashboard was initiated, OCCTA has sent clarifying information requests to LeighAnn Blackmore and James Preusser with questions about confusing information.  Our previous MOU stated:

"Informing OCCTA and all employees at the worksite whenever a student, employee, or visitor at a worksite has tested positive for COVID-19. OCCTA will be provided with a weekly update of these worksites. The OCPS “dashboard” may be utilized for this purpose provided the OCPS uses reasonable efforts to immediately update all incidents."

For example, because they bundled schools and work locations under headings like "Alternative Ed", "ESE", "OTHER", "Teaching and Learning", etc., we would send requests asking what the actual name of the school or worksite was. For instance, Fort Gatlin employees had no way of knowing if there was a positive case at their site. Although the District had this information and it was easily accessible they would typically take  weeks or months to provide the information. Mind you, this is information that they easily could provide within hours. Administrators have to confirm cases and notify the District -those records with actual names of schools and worksites should be there. The District's refusal to provide this information in real time was passive aggressive and mean-spirited on every level.

After we declared impasse for the second time, Preusser decided they would no longer fill our information requests. Currently,  OCCTA has to put formal requests through the OCPS records department and  pay  for clarifying information that we request to share with teachers and parents in real time.  We have paid thousands of dollars for requests. The District has required us to pay before they release the information. We still have not received information that we already have paid for dating back many weeks! THIS IS WHY WE NEED AN ENFORCEABLE MOU! WE CANNOT AND DO NOT TRUST DISTRICT LEADERS TO PROVIDE CRITICAL INFORMATION IN REAL-TIME!

Want to see what a dashboard that has readily available information on positive cases and quarantines looks like?  Check out Miami's dashboard: 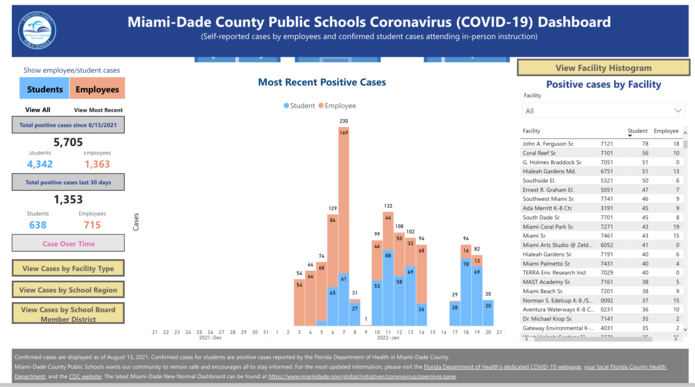 See on the right the easy accessible list of schools and worksites with the number of employees and students next to it? That is what I suggested to the District at the Joint Safety Committee meeting. My suggestions was flatly rejected. The information on the OCPS dashboard is not clear. One thing is -the District is NOT transparent and does not seek to provide information in a clear and easy way that would give security and peace of mind to stakeholders.

The dashboard information is often changed after it is posted; it does not reflect all of the positive cases as teachers and parents state.  In fact, at the first impasse hearing a teacher testified she was positive, notified the school and FL DOE, yet her case was not on the dashboard. Days after the hearing the District went back and corrected the dashboard to reflect her case. THIS IS WHY WE NEED AN ENFORCEABLE MOU!

What else should you notice on this dashboard? The numbers of cases!

Miami is a much larger school district than Orange -the 4th largest in the nation with 339,000 students and 41,000 employees compared to OCPS' 206,246 students and 24,576 employees.  Their positivity rates have often been reported as higher than our county's positivity rates. Yet, look at Miami-Dade's total positive COVID-19 case numbers for this school year - 5,705, as compared with OCPS, which has reported a staggering 18,116 positive COVID-19 cases for this school year. (These dashboards are both from 1-20-22.)

OCPS has more than 3 times the positive COVID-19 cases than Miami-Dade!  To be fair Miami-Dade started reporting their cases on August 13th, so let’s subtract the 442 positive cases reported by OCPS for those 13 days. You still have 17,674 cases in OCPS or 11,969 more than Miami-Dade’s 5,705 cases. What is the difference? In Miami-Dade the District and Union have an enforceable MOU with clear CDC-recommendations.

The OCPS District leaders own every one of the 18,116 positive case numbers that represent a child or employee's illness and suffering. The District leaders' lack of urgency, refusal to partner with stakeholders and the Union, to listen to the educators, or to take suggestions is why the numbers are off the charts! THIS IS WHY WE NEED AN ENFORCEABLE MOU! 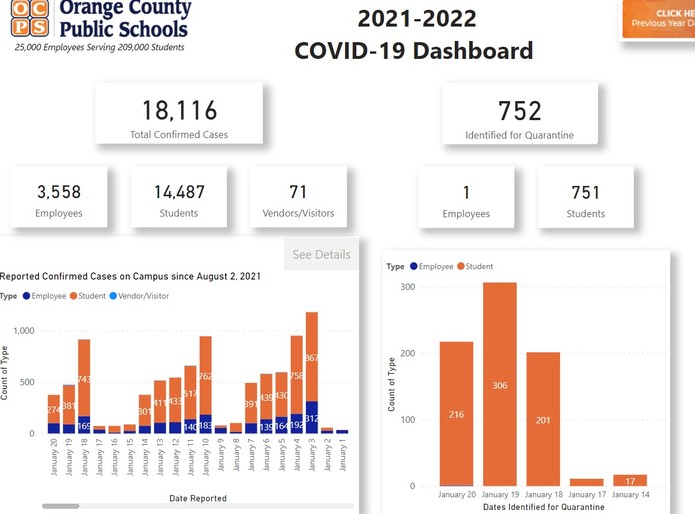