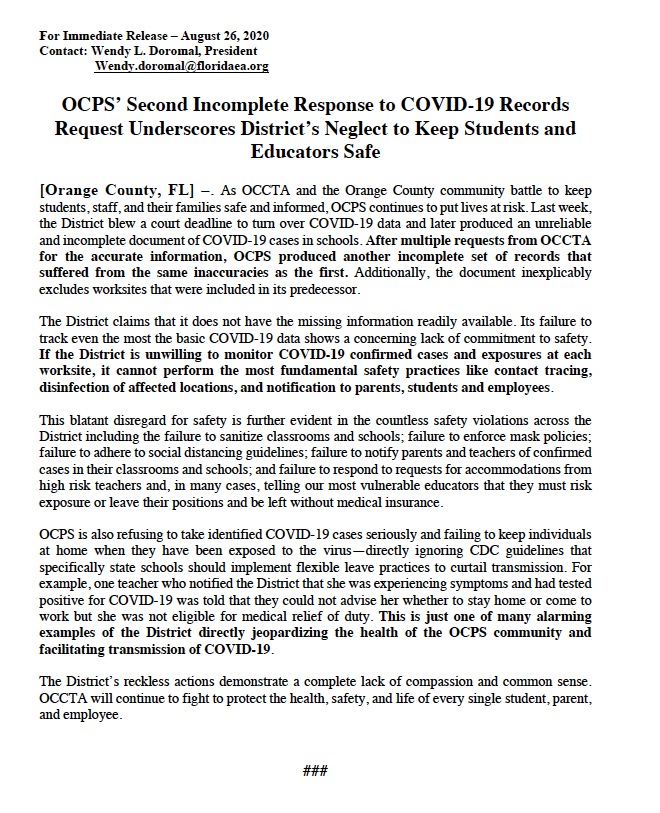 On July 31, 2020, OCCTA filed a lawsuit against Orange County Public Schools regarding the School District’s failures to keep students, staff, and the community safe during this COVID-19 pandemic, and the District’s refusal to be transparent and turn over public records OCCTA has asked for on behalf of educators and children regarding the safety of the OCPS community.

On August 17, 2020, Judge Donald Meyers, Jr. ruled in favor of OCCTA and ordered OCPS to turn over "a list of names of all worksites where there are and/or have been employees, students, visitors, vendors, or any other individuals who have tested positive for COVID-19 since June 1, 2020 . . ." The order called for the District to turn the documents over to OCCTA within 48 hours of the August 17, 2020 hearing. Read the Final Judgement at this link.

The District not only failed to meet the deadline, but turned over an incomplete and convoluted record to OCCTA. The record contained the names of 192 schools and worksites. It also contained hundreds of names of job descriptions and departments rather than the names of the worksites and schools. After a local media outlet published the incomplete list, teachers and parents contacted OCCTA to inform us of names of schools and worksites that were omitted from the record.

OCCTA condemns the District’s lack of transparency and failure to respect and adhere to the judge’s order. The District has continually failed to collaborate in good faith or work with OCCTA to find real solutions and make comprehensive plans. It continues to fail to be transparent on safety-related information. Its actions and inaction put real lives at risk.

OCCTA is gravely concerned about the health and safety of every OCPS student, employee, their family members and community at large. We were notified that a teacher tested positive for COVID-19 multiple times. She notified her principal who contacted the OCPS Department of Professional Standards, which monitors and oversees procedures and policies for those employees and students who test positive for COVID-19. The teacher reported she did not have a fever, but continued to have shortness of breath and difficulties breathing. After hearing of her test results and symptoms, the OCPS Department of Professional Standards sent her the following email message: “I cannot advise you to stay at home or come to work. You do not meet the criteria for relief of duty with pay. If you still feel sick and decide not to come into work, you will have to use your own leave.” The teacher reported to work, even though she had not recovered and tested positive.

An elementary school teacher emailed OCCTA to report that she was not feeling well so she went for a rapid COVID-19 test, which came back negative and she reported to work. After developing more symptoms, a second test came back positive, so she notified her principal. The teacher is concerned because as of Wednesday, OCPS still had not informed teachers or parents. The teacher believes that the class was exposed on Friday, August 31, 2020 and stated that the administrators are following orders from the District.

A middle school teacher contacted OCCTA on Friday with this question: “What is the procedure when someone at work tests positive? I was just told that someone who was in the office area with me tested positive but no one has formally notified me. Will students and their families be notified before they send their kids to campus tomorrow?”

Here is another concern: “We have a teacher that had a student test positive today. The student was in her classroom yesterday. She was told that contact tracing will be done, but that she is to tell no one about it and that she is to report to school as normal tomorrow. She was told that someone would contact her. She was also told that she will be given a script to use with her students tomorrow. She is very concerned since this student was just in her room yesterday and tested positive. She is worried that if more kids get sick that there could be repercussions for her. She is also afraid of testing positive herself.”

This is especially important because OCPS does not protect many teachers who have health issues or family members that they care for who have health issues. They have applied for and received ADA accommodations. However, their administrators told them that there are no virtual positions so they may resign, take extended leave or accept a face-to-face position. Some have fearfully consented to teach face-to-face because they need insurance to cover medical expenses.

to file a grievance. Include your name, the name of your school or worksite and immediate supervisor or principal.

At least 5 teachers have resigned since Friday alone. How many more teachers is this District willing to lose?

On August 25, 2020, it was reported by The Hill that since Florida schools opened for face-to-face instruction, there have been 9,000 new COVID-19 cases for children under age 18. We demand that the District reveal the names of each worksite and school where positive cases of COVID-19 have been identified on a daily basis, so teachers, parents and the public can make a fact-based decision as to whether or not they will report to work or school. The District’s behavior demonstrates a total lack of compassion, common sense and consideration for the safety and health of the workforce, students and community.

It appears our attorney’s letter to OCPS inspired the district to release at least some information regarding COVID-19 cases to parents and teachers. The list is not complete, according to teachers who have COVID-19 or know of peers in their schools that do.  One teacher said this about the District’s message: “And now tonight OCPS sent out the following email, and STILL the teachers who were in a meeting with our confirmed teacher have not been contacted. The email from the county also states that all of the principals informed the parents at the schools, that did not happen in our case either.”

OCCTA will continue to fight for the health, safety of each student, parent and educator. The District and its leadership must and will be held accountable for the inevitable consequences of their reckless actions. 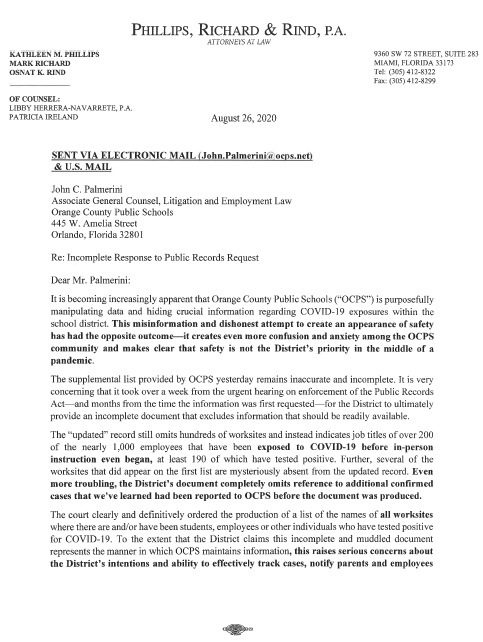 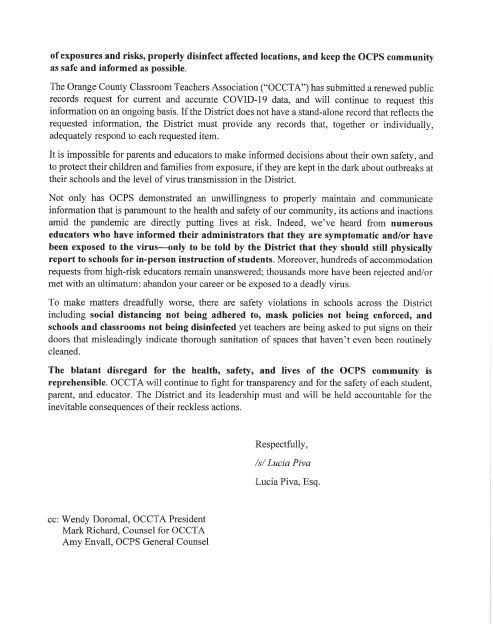