The newly appointed (but not confirmed) Florida Surgeon General Dr. Joseph Ladapo, has issued a rule that parents get to decide whether their asymptomatic child who has been directly exposed to COVID-19 will quarantine.

That's right - parents will decide if their children who may be COVID-19 positive, and may not have been tested will attend school to potentially spread the virus on the bus, in the classroom, in the cafeteria, in the hallways and everywhere else. As if maintaining protection during this pandemic has not been enough of a challenge, now the state’s head physician will allow parents to play Russian Roulette with the health of other students, educators and the community at large. With more students on campus and less social distancing what do our state and District leaders do? They eliminate protections that were in place last year and also reduce transparency to make learning and teaching in our schools extra fearful and uncertain.

WHAT IS THE POSITION OF OCPS? The District put out a notice on Facebook saying that their attorneys were reviewing the Florida Department of Health's new rule that was issued by the surgeon general:

Yet, that same evening the District sent an email notifying the parents and employees of the new rule, as if  OCPS already adopted it:

Later in the afternoon of September 23, 2021, the District took down the original student quarantine policy and replaced it with the Surgeon General's new rule giving parents choice in deciding whether or not to quarantine their child. 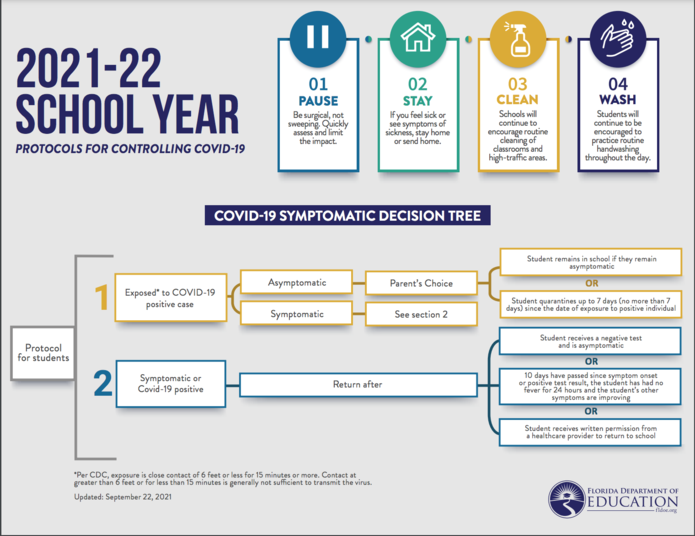 Apparently, the District adopted the state's new, dangerous parent choice quarantine policy? CTA was not noticed, but of course the District seldom collaborates with the union.

Some more background on the new surgeon general - The surgeon general has not yet been confirmed by the Florida Senate, but is already making rules and taking actions. He has been licensed to practice medicine in Florida for only two weeks.

The Orlando Sentinel outlined his background in an editorial (this link). Some snippets from the Sentinel article:

There is certainly reason for concern as the FLDOH could not even keep up with quarantines in schools. Some students got quarantine letters after they returned to school. An article about the lags in reporting from the West Orange Times at this link stated:

“It is taking four to five business days for them to issue quarantine, then a day for them to actually contact the families and quarantine the student,” said a Horizon West Middle School parent who also asked to remain anonymous. “I believe the biggest issue for contact has been the weekend. It seems to me that they don’t notify or trace over the weekend, which is causing more exposures.”

Other stories on the new quarantine rule and the Florida's new surgeon general are at these links: