News You Can Actually Use

"We are seeing more and more teachers resign and retire early. There are vacancies in schools across the District. The District must treat teachers as experienced valued professionals and not as disposable and replaceable labor units. Stand up and speak out now. Every teacher is worth more than the .02 - 12 cents an hour pay raise that OCPS offered." President Wendy L. Doromal

Yesterday the District sent another News You Cannot Use with untruthful and distorted information. The chart below is an attempt to unravel the facts: 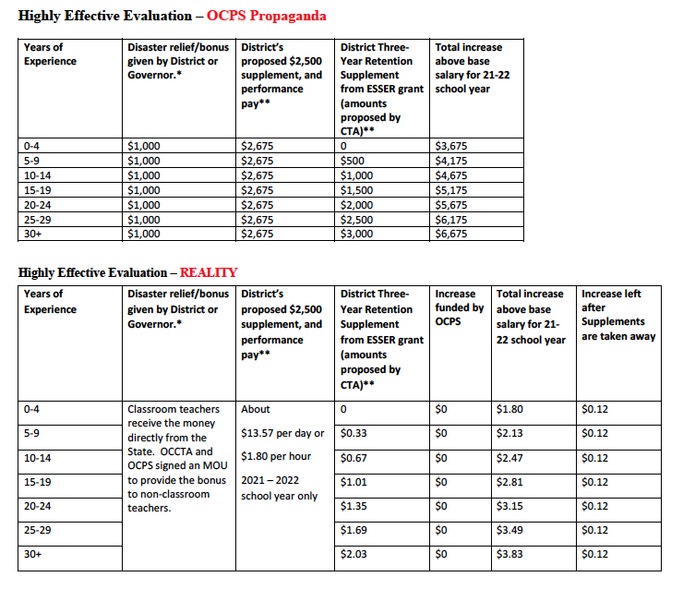 FOR HEALTH AND SAFETY IMPASSE UPDATES 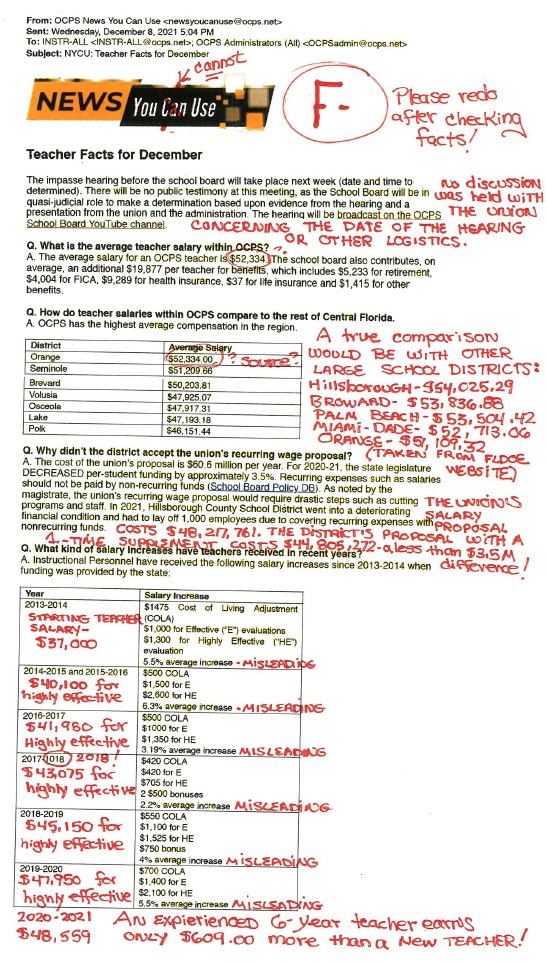 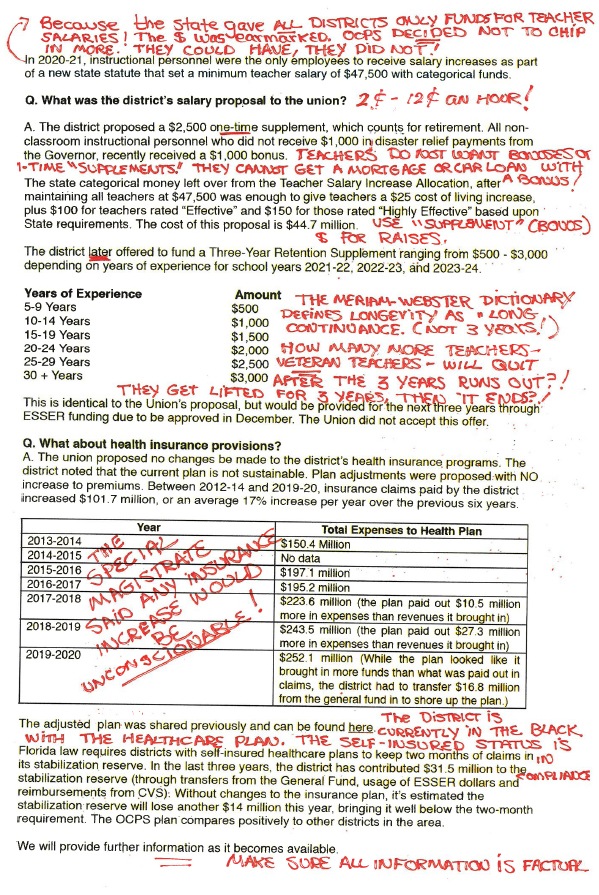 Yesterday (December 8, 2021) the District sent a News You Can Use that wrongfully stated that the impasse hearing would be held next week. This is not true. The parties have still not set a date and we will let you know as soon as we do.

Our attorney received an email yesterday that they would meet the next day (today) to set a date, time and place for the hearing. Then just hours later, the District's News You Can Use went out!  The District’s refusal to collaborate and insistence on maintaining autocratic control has reached new heights. OCCTA will insist that this important hearing be held at a time that our attorneys and teachers can be in attendance.

The “facts” in the District’s email also need to be corrected.

Comparison with other Districts:

The District often compares Orange County’s salaries to small local districts that have lower cost of living and housing expenses than Orange County. A true comparison is with the state’s other large districts. Notice which district is on the bottom!  From the Florida DOE 2021-2022 Final Survey Teacher Salaries: 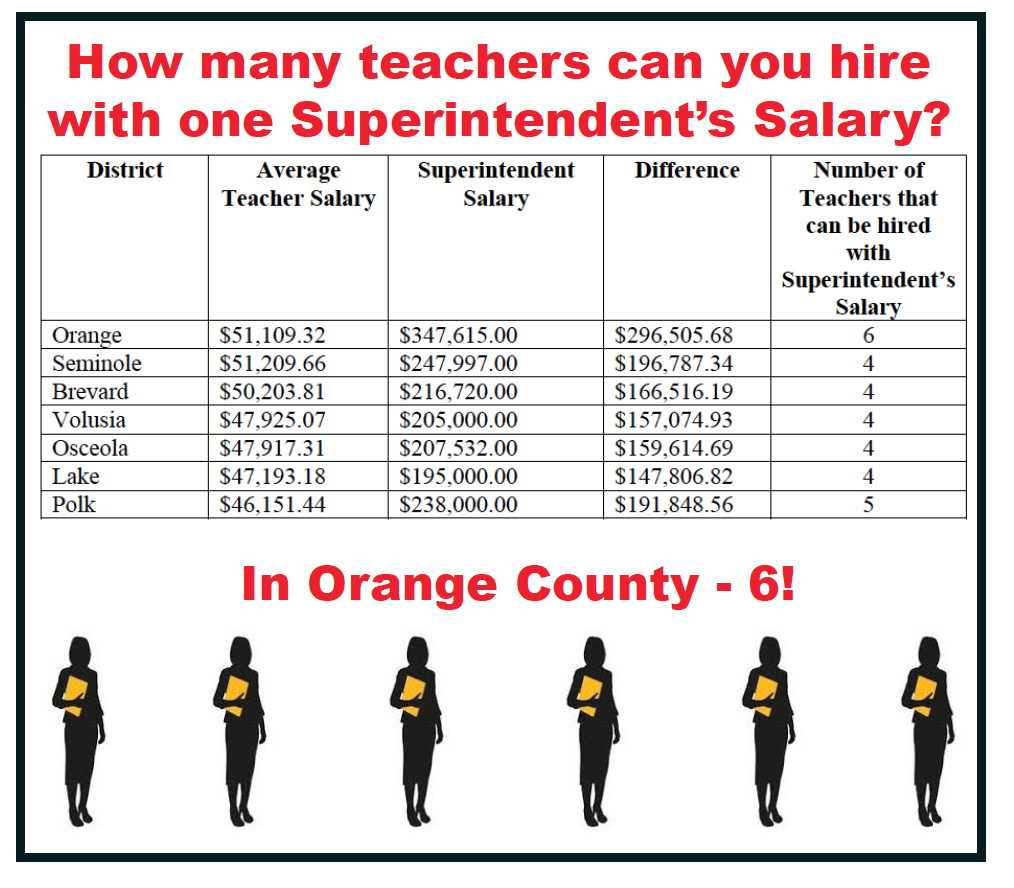 The Union’s salary proposal costs $48,217,761 and the District’s proposal, including the non-recurring supplement, costs $44,805,272—a less than $3.5 million difference. The District insists on bonuses and raises, even though for years we have stated that teachers need raises! Banks look at salary, not bonuses when deciding if a person qualifies for a mortgage or car loan.

The District refuses to budget for raises and depends on state funding alone. Last year the total amount of money that school districts received from the state was mandated by law to be spent to raise the base salary of all teachers to $47,500. There was a tiny pot of money left to raise veteran teachers a minuscule amount.  OCCTA had to declare impasse to get the District to put in some of their money to include the VPK teachers in the base pay raise.

The District’s salary proposal amounts to a base hourly increase of $0.02 to $0.12, depending on the teacher’s evaluation, even though there is no dispute that the District can afford at least the majority of the Union’s salary proposal this year as most of its cost is already contemplated in the 2021-2022 budget. The real issue is the District’s unwillingness to prioritize teachers and refusal to budget appropriately in outgoing years. The budgets for outgoing years have not yet been developed, and the District has the capability to explore cost saving decisions and to prioritize accordingly. Teachers only ask that the District leave no stone unturned. It has not done so. Instead, the District proposed a minimal increase funded entirely by state categorical dollars (that it could not legally spend on anything else) and a one-time supplement that will not pay for teachers’ recurring bills or allow them to plan their finances or support their families.

The Union agrees with the Magistrate’s analysis to the extent he notes “TSIA cannot be the sole source of funding for educator raises," and that “the District is permitted to budget for salary increases and may look to other funding sources to support is efforts.” However, educators do not trust that the District prioritized salaries or made any real effort to fully evaluate options for funding recurring raises outside of state categorical dollars. The Union suggested several potential sources of funding for recurring increases and it is the District’s job to explore each of these and other opportunities.

What about  health insurance provisions?

The District wants to raise the cost of health care in the middle of a pandemic, at the same time that it proposes a $25 cost of living adjustment. Of course OCCTA rejects any increase to health insurance costs during this difficult time. The Special Magistrate agreed with the Union and wrote:

"It is important to note that our Country is just beginning to break free from the negative effects caused by the pandemic. During this time, the record reflects, and there is no dispute, that bargaining unit members put their own health at risk by continuing to perform their teaching duties with students on an in-person basis. In addition, the record reflects and there is no dispute that numerous teachers spend their own money to ensure that their student’s educational and safety needs are met. Moreover, the record reflects that many bargaining unit members are forced to work more than one job in order to meet the needs of their family budget. To this Magistrate, it would be unconscionable to recommend that bargaining unit members pay more than the status quo for health care. While there may be a time to do so, now is surely not the time. . . this Magistrate recommends NO CHANGE to the current health coverage."

At the November Insurance Trustee meeting it was confirmed that the District met the required 60 months to maintain the self-insured status. It is unnecessary to raise healthcare costs at this point.

We are seeing more and more teachers resign and retire early. There are vacancies in schools across the District. OCPS must treat teachers as the experienced professionals we are and not as disposable and replaceable labor units. Stand up and speak out now. Every teacher is worth more than the .02 - 12 cents an hour pay raise that OCPS offered.

For more information and to read the recommendations please go to this link: /SALARY-IMPASSE-UPDATES-6-20838.html .