"The Union rejects the Magistrate’s recommendation as to Article XVI(A)– Salary, Salary Increases & 2021-22 One-time Supplement. The District’s salary proposal, as accepted by the Magistrate, fails to use fiscal ingenuity to provide real raises—it is wrong to encourage such a practice that devalues teachers so gravely.

The District’s salary proposal amounts to a base hourly increase of $0.02 to $0.12, depending on the teacher’s evaluation, even though there is no dispute that the District can afford at least the majority of the Union’s salary proposal this year as most of its cost is already contemplated in the 2021-2022 budget. The real issue is the District’s willingness to prioritize teachers and choose to budget appropriately in outgoing years. The budgets for outgoing years have not yet been developed, and the District has the capability to explore cost saving decisions and to prioritize accordingly.Teachers only ask that the District leave no stone unturned. It has not done so.

Instead, the District proposed a minimal increase funded entirely by state categorical dollars (that it could not legally spend on anything else) and a one-time supplement that will not pay for teachers’ recurring bills or allow them to plan their finances or support their families.The Union agrees with theMagistrate’s analysis to the extent he notes “TSIA cannot be the sole source of funding for educator raises," and that “the District is permitted to budget for salary increases and may look to other funding sources to support is efforts.”However, educators do not trust that the District prioritized salaries or made any real effort to fully evaluate options for funding recurring raises outside of state categorical dollars. The Union suggested several potential sources of funding for recurring increases and it is the District’s job to explore each of these and other opportunities.

Any recommendation that supports the District’s refusal to budget for educator salary increases should be rejected. The District cannot be allowed to rely solely on categorical state funds for salary increases, ultimately becoming a pass-through organization and thereby rendering negotiations meaningless and depriving educators of livable wages. The school system and the public deserve better.The interest and welfare of the public is served by valuing teachers and providing salaries that attract and retain qualified and dedicated educators.

Accordingly, OCCTA respectfully rejects the Special Magistrate’s recommendation as to Article XVI(A) – Salary and its one-time supplement for instructional employees."

OCCTA supports the  following special magistrate's recommendations: the longevity supplement,  no increase to health insurance, a 5% salary supplement for all lead nurses, including summer sick leave into the CBA and allowing all employees to donate sick leave to other employees.

Thank you to everyone who took the survey -over 1,550 of you!  The results helped us to respond to the special magistrate's decision.

Method of Payment (Number of pay checks - both parties withdrew) 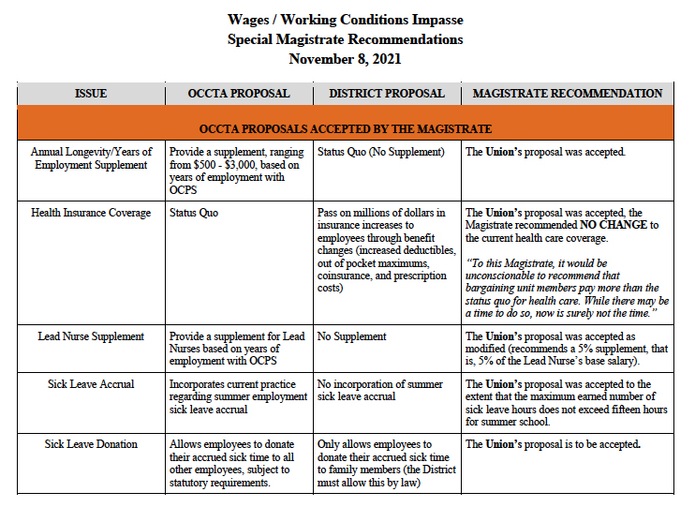 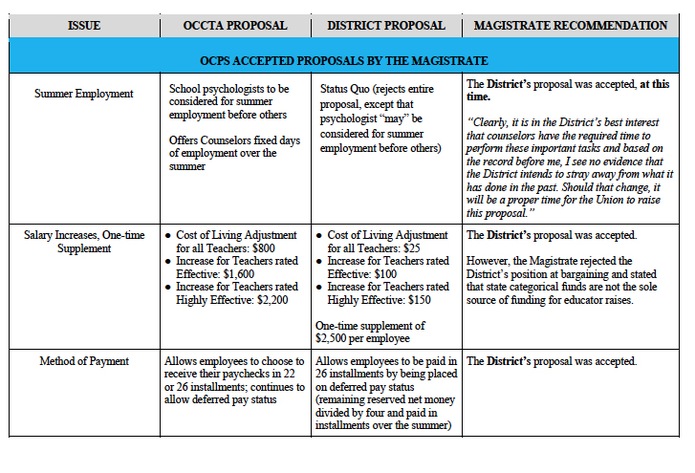 The Impasse Timeline for Salary, Benefits and Working Conditions: