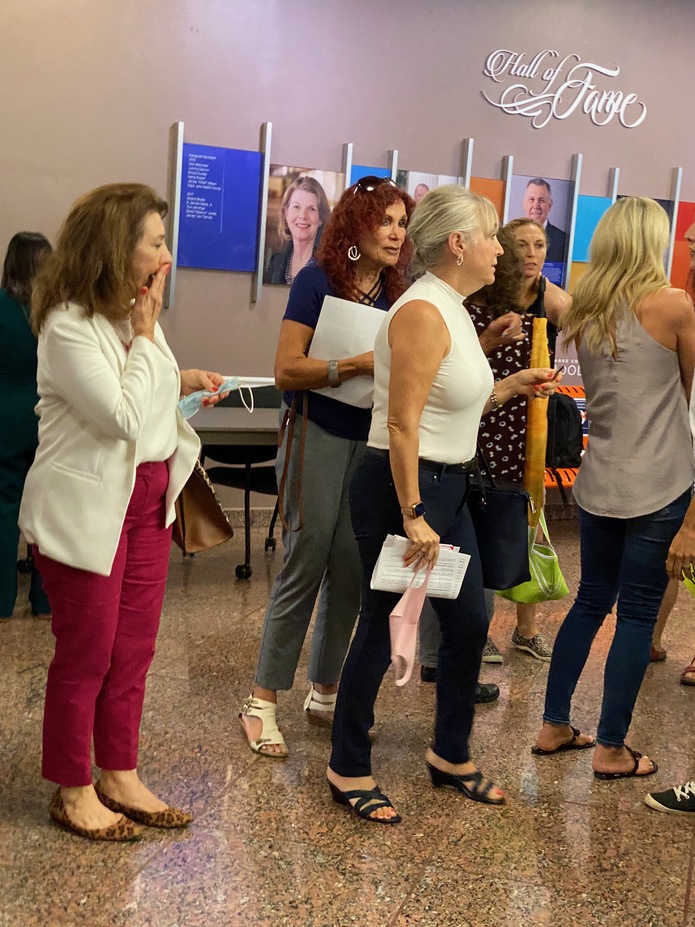 Since at least June 2021, the OCPS School Board Meetings have been chaotic and disturbing.  CTA supports free speech and the rights of all community members to participate. But when some attendees are allowed to freely violate the OCPS Code of Civility and the Mask Policy, and even bully and harass others at board meetings a line has been crossed.  We urge the School Board members and OCPS District leaders to enforce their own policies at every school board meeting and in every OCPS building and property, each and every day.

What message is being sent to violators when they are allowed to violate policies at School Board Meetings? It empowers them. It tells them that policies that are intended to provide protection are not enforced and are not important. It sends the message that district leaders are not serious. It sends a message to the parent-violators that their children who violate policies will also be forgiven.

What message does it send to those following the policies at School Board Meetings? It sends the message to teachers that there are two standards -one for teachers who ignore violations and face discipline at Professional Standards, and another for District leaders and personnel who continually allow violations without a care.  It sends the message that the District leaders are unconcerned for the safety and protection of those attendees who are following policies. It sends the message that the District is not serious about the protection and safety of students, educators and the community in all of its buildings and schools.

View a couple videos taken by the anti-masker group that illustrate the lack of enforcement of policy:

If you are among those who protest the non-enforcement of OCPS policies at the RBELC and School Board Meetings please email the leaders. Their email addresses are below the President's email.

Email to School Board Members and District Leaders

I first noticed things becoming unsettling at OCPS School Board meetings at the June 17, 2021, meeting, as I expressed in the last paragraph of a July 12, 2021, letter to School Board members. (Read it at this link.)  Things have only escalated since that meeting.

After witnessing disturbing incidents at the August 24th School Board Meeting, CTA sent an Open Letter to the School Board Members calling for them to enforce their own policies at School Board meetings, at the RBELC, and all OCPS property.

During the August 24th School Board meeting, I went to the lobby after the public comment period and asked an OCPS Senior Administrator why they were not enforcing the mask policy in the lobby. He said, “We tell them to put on a mask before they enter the school board meeting room.” I told him, “The lobby is OCPS property too.” We must pass through the lobby to get to and from the meeting room, and the speaker sign up table is in the lobby.  I told him people in the meeting room also had no masks, and in fact, deputies ignored the violations and had their own masks below their noses. He said nothing.

I later spoke to several school board members after that meeting to urge them to enforce their own policies and provide a safe environment. I mentioned how the board members left the podium twice during June 17th meeting leaving the participants surrounded by unmasked, shouting disrupters who harassed us.

There are dedicated educators, parents and community leaders who attend every meeting to speak in support of elevated protections for OCPS students and educators. Yesterday one of them sent an email to school board members and District leaders to outline the entire experience of the August 24th meeting. She included video footage and photographs. According to this attendee and others, Tuesday evening at the School Board Budget Hearing, the anti-masker, anti-vaccine crowd was even more empowered than ever. They were not wearing masks in the lobby or in the board room. They threatened and bullied those who came to speak in favor of masks. They called school board members and other attendees “Nazis”, and they violated numerous policies, including the Code of Civility and the mask policy.

It appeared from shared video footage that at least one OCPS deputy aided and encouraged their behavior. The deputy was seen with the cell phone of an anti-masker taking a group photo of the unmasked group that posed for him at the back of the board room.  He then joked with her as he handed the phone back. Instead of enforcing the policy, he empowered the group to violate it.  Instead of protecting the participants who were being harassed, he protected and encouraged the violators.

When school board members leave the board room (to protect themselves?) for minutes at a time and leave the violators in the room to shout and harass those who are following the policies, it is truly troubling. The senior administrator and deputies merely appear to placate and calm down the crowd. They do not enforce policies. They do not escort them out of the room or building. They do not protect the rights of other attendees.

At the August 24th School Board meeting, Jacob Engels, a well-known affiliate of the Proud Boys and Roger Stone, harassed teachers outside of the RBELC filming them and arguing about Critical Race Theory.  He was back to torment parents and pro-maskers at the September 14th meeting, according to attendees. (See these links for more background on Jacob Engels (Florida Politics , Orlando Sentinel .) I believe in free speech and everyone’s right to assemble, protest and to attend public meetings. What I do not believe in is allowing people to enter or remain in a public space in violation of laws or policies.

Going to a school board meeting should not be like going into battle. Attendees should not be afraid to use the restroom or walk to their cars in the parking garage. Please take immediate action to stop this disturbing behavior. Please hire OCPS deputies who will enforce the policies.  Why should the rule followers be the ones who are unable to attend meetings out of fear for their safety? This is wrong on so many levels. I urge you to stop enabling violators and start protecting policy followers.

EMAILS FOR SCHOOL BOARD MEMBERS  and please copy us at orangecta@gmail.com