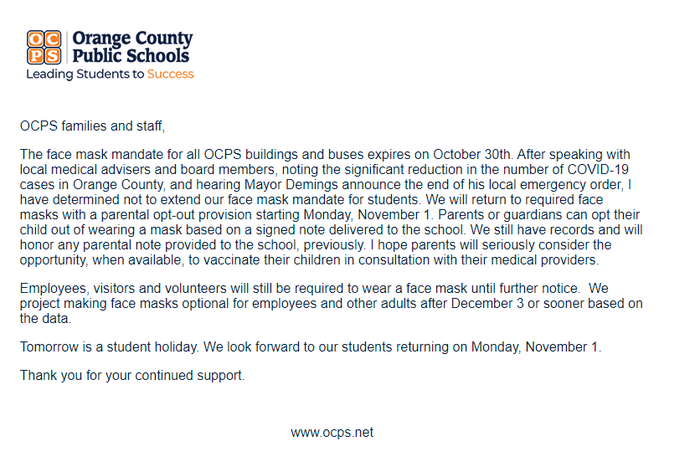 Starting on November 1, 2021,  parents will once again have the option to allow their child to opt out of wearing a mask. The OCPS announcement does not mention that their new policy ignores CDC guidance which states, "CDC recommends universal indoor masking by all students (age 2 and older), staff, teachers, and visitors to K-12 schools, regardless of vaccination status."

The OCPS release stated that Mayor Deming's announcement ended the county-wide mask order, but it failed to state that Mayor Demings also announced that he will keep the universal mask requirement for all Orange County buildings citing CDC recommendations.  (see the press conference at this link: https://www.youtube.com/watch?v=pzBUAPIdRrs).

At the October 26th school board meeting, Superintendent Jenkins stated she was waiting to make a decision on whether or not to continue universal masking based in part on Mayor Deming's announcement consultation with medical experts and each school board member.

Channel 6 news reporter, Lauren Cervantes asked the Mayor, "What message are you sending to Orange County Public Schools and what does it mean regarding their decision tomorrow that is expected on the mask mandate when you let the EO expire removing the state of emergency, but keep masking at county facilities. Does that send a mixed message? Did you speak to Superintendent Jenkins?

The Mayor said he does not speak for the school board. He stated, "For the employees within Orange County - we have to serve our community and we have to do so knowing that the virus is still in our community. People are still contracting the disease. . . I think I was clear today that we had a funeral today. There is no time for us to relax and say this is over. We still have a responsibility to act in the safest manner we can. "
Apparently Dr. Jenkins did not consider these words when making her decision.

CTA questioned which "local medical advisors" the Superintendent listened to? It certainly was not the majority of the practicing physicians that serve on the OCPS Medical Advisory Committee. They favored maintaining the mandate at least until children under twelve had the opportunity to be vaccinated. (You can read their statements at this link.  You can view the MAC meeting at this link. )

The OCPS General Counsel Amy Envall replied to an inquiry stating Jenkins consulted with Dr. Hsu, Dr. Pino and the very vocal anti-masker OCPS medical consultant, Dr. Mercedes Rodriquez.  The superintendent consulted with those who would agree with her already made decision to allow parent opt-out.

CTA also questions whether or not OCPS plans to move ahead with the lawsuit filed in September? OCPS joined with the Alachua and Broward School Districts to challenge the rule that makes mask mandates illegal and sanctions school districts that adopt them. (This link)

After just receiving the news that Dr. Jenkins is letting the mask mandate expire, we at Mask Up OCPS are devastated and angry.

We understand the community Covid numbers as a whole look great at the moment but we are disappointed that Superintendent Jenkins and the Board failed to acknowledge the special environment they have created for our kids. The parents of Orange County and their Medical Advisory Committee were encouraging them to keep our kids in the safe bubble of universal masking until they too had the opportunity to begin to reach 70%+ vaccinated.

December 3rd or earlier for optional adult masking may seem fair to a population of 70% or more (some of which have boosted immunity), but it is not fair to our children who aren't even promised the opportunity to receive both initial doses of the vaccine by that date. Our children have a right to be fully vaccinated before a teacher takes their mask off in their classrooms.

Asking for the six week extension stuck with all current medical advice, protected our children until vaccination was available, and it gave an end date to those that are eager to take their masks off. It was a compromise from parents that honestly never wanted to be put in a situation where they had to compromise on their child’s safety in the first place.

This decision only benefits a small group of less than 10% of students whose parents are following the lead of domestic terrorists which have falsely convinced them that their freedom is at stake. Meanwhile, thousands of students whose parents can’t keep them home, or have special educational needs that prevent them from being in school will continue to suffer as a result of this decision.

The leaders of OCPS have proven that they care more about politics and threats than the safety of our kids and we are beyond disgusted.

One thing that OCPS leaders do not seem to understand is teachers are leaving because they do not trust District leaders or the School Board to protect them and keep them safe.  We know that the state makes it very difficult! However, there are many protections that the district could put in place - ones they had last year. This is why we need an enforceable MOU!