Impasse hearings on wages and salaries were held on September 14th and September 15th. The District made excuses for maintaining a reserves account over 17% - 14% higher than the 3% balance required by law.   Year after year the district has over-budgeted lines items, including instructional. Instead of using funds on raises, the overages were returned  to the bloated fund balance.  Other takeaways:

What's next? The court reporter has ten days (9-27-21) to get the transcript of the impasse hearings to the District and CTA. The parties have until October 22nd to submit their briefs to the Special Magistrate. Then he will review and give a ruling.  Look for updates here!

Please scroll down to read the District and CTA proposals.

A school board that can budget millions of dollars for 200 plus administrators and ELC managers to get a 24% retirement package can certainly budget for employee raises!

A school board that has a reserves funds way over the 3% requirement year after year after year can put a decent amount of that money where it is needed and budget raises.

A school board that used CARES ACT money to offset the expenses they budgeted from the general funds to purchase laptops for all students can afford decent raises.

A school board that budgeted to update HVAC systems, but didn't have to take the money from the general fund because CARES Act money was used, can afford to pay decent raises.

A school board that hired 1,000 "Tier One" teachers with CARES ACT money can use savings that would have spent on salaries for raises.

A school board that has used CARES ACT and ESSER funds to hire substitutes instead of using money from the general fund can afford to pay decent raises.

The school board members all pointed to Tallahassee and claimed they didn't get enough from the state to adequately fund raises. OCPS previously used district funds for raises. OCPS CAN budget raises. They WON'T. It is a matter of priorities. They can and have to do better. https://www.youtube.com/watch?v=s663yulU_VU

DID YOU EMAIL THE SCHOOL BOARD MEMBERS CONCERNING RAISES, BENEFITS AND WORKING CONDITIONS? IF NOT, PLEASE DO! YOU ARE THE UNION AND THE MORE MEMBERS WHO ACT (RATHER THAN SIT ON THE SIDELINES) THE GREATER CHANCE THAT OUR UNIFIED YOUR VOICE WILL BE HEARD:

Why Are We At Impasse? 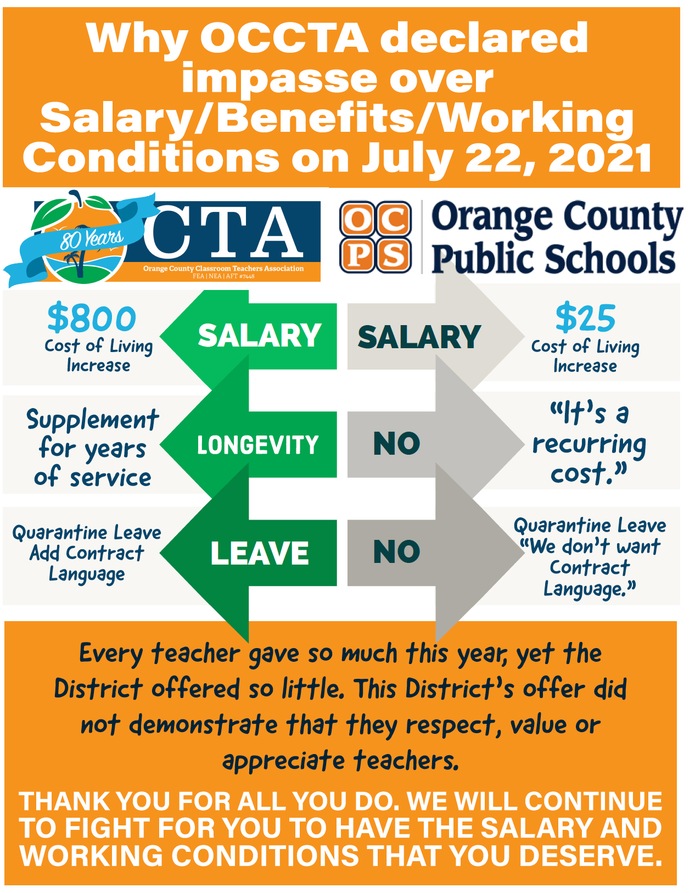 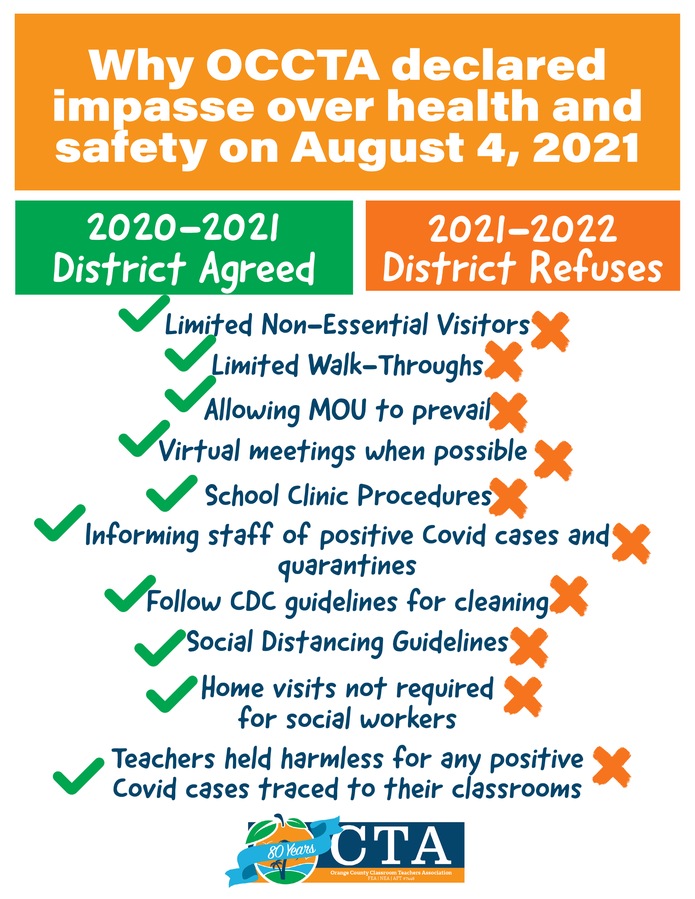 Scroll down to read proposals and for more information.

CTA continues to work on issues related to both impasse hearings. A special magistrate was selected for the salary and other main table impasse hearing, which is scheduled for September.

Multiple school board members stated that they were told that they were not allowed to the CTA President during impasse. This misinformation allegedly came from OCPS attorney John Palmerini and the Chief Negotiator James Preusser.

Our attorneys informed us that the insulated period when parties should not be speaking to each other begins when either party waives the special magistrate process (which the District has refused to do), or when either party rejects the decision of the Special Magistrate. Until such time, the union president can speak to the Board members about negotiations/issues at impasse.

We object to the interference by the District leaders who appear to want to control the message and silence the voice of the educators.

The District sent a 'News You Can Use' to you yesterday stating, "Please note that due to CTA previously declaring impasse on the district’s compensation proposal there can be no disbursement of $1,000 bonuses for non-classroom teachers left out of the Governor’s bonus."

Even though impasse was declared, the District certainly can still negotiate with the union and sign a stand-alone agreement with CTA to provide $1,000 bonus for any OCPS instructional personnel who were left out of the agreement. CTA sent the District the MOU below, which has been signed by the union President and urges the District to also sign it so that the non-classroom teachers can be compensated immediately. 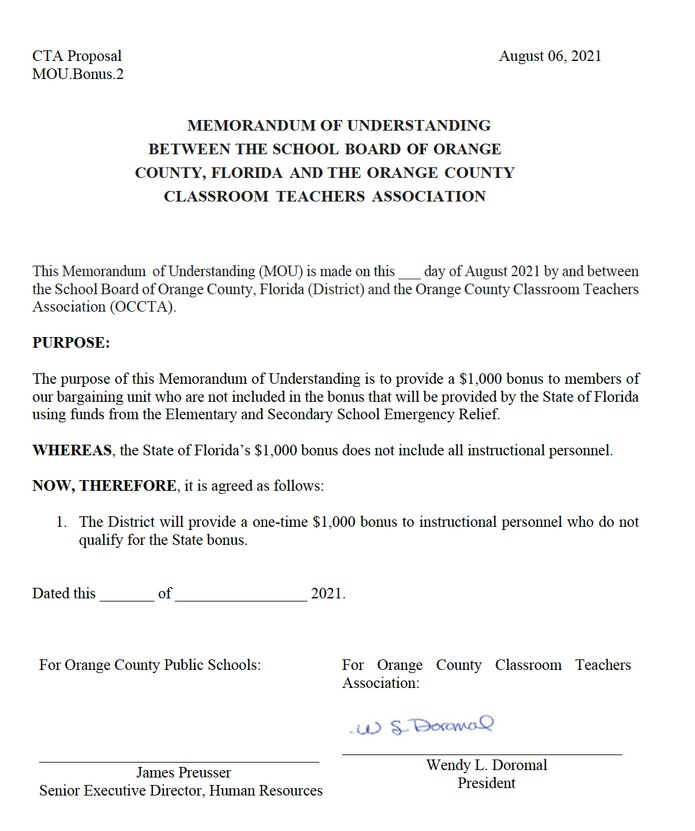 CTA met with the District Monday, Tuesday and today to bargain health and safety issues related to the pandemic. Earlier in the evening, we signed an MOU concerning COVID-19 related leave.

Finally, tonight at 8:58 pm after many long hours of bargaining with the District, OCCTA declared impasse.  Go to this link for updates: /SUMMER-BARGAINING---Updated-July-22--2021-1-10521.html .

We will continue to fight to demand safe working conditions during this pandemic. 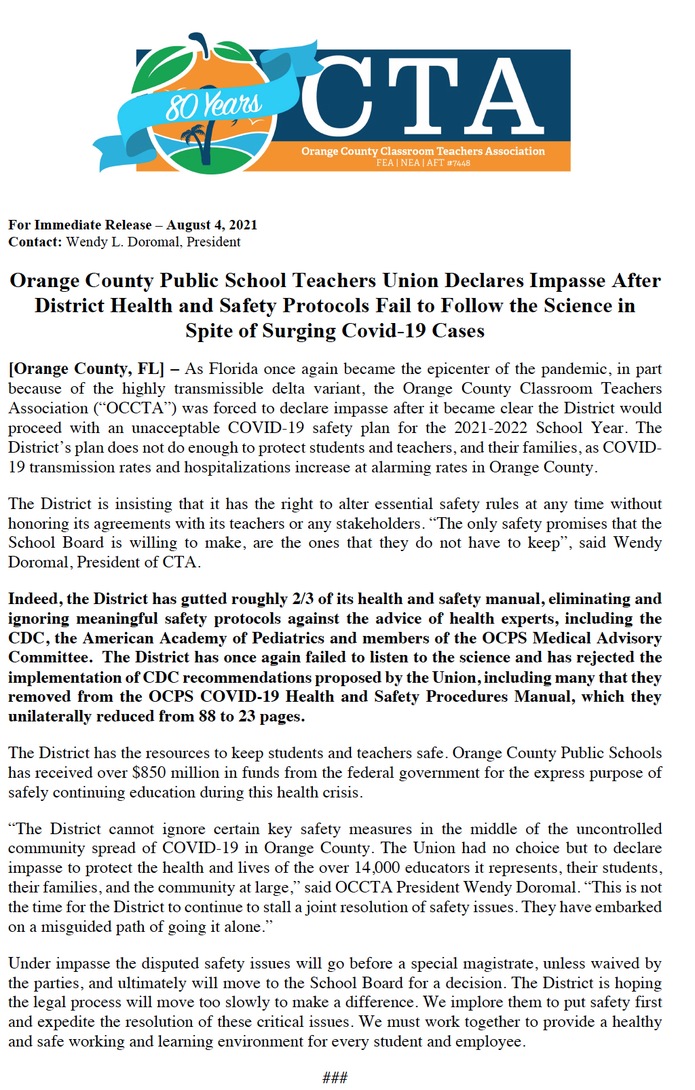 At the bargaining table this week, the District's Chief Negotiator stated that the School Board wanted to "have control" over safety and health procedures and we were handed ridiculous counter proposals that struck through essential health and safety procedures, even as COVID-19 rages in our community.

Some take aways from bargaining -

Today CTA and the District signed one agreement to provide employees with COVID-related medical relief. Other proposals were still being negotiated before impasse was declared. 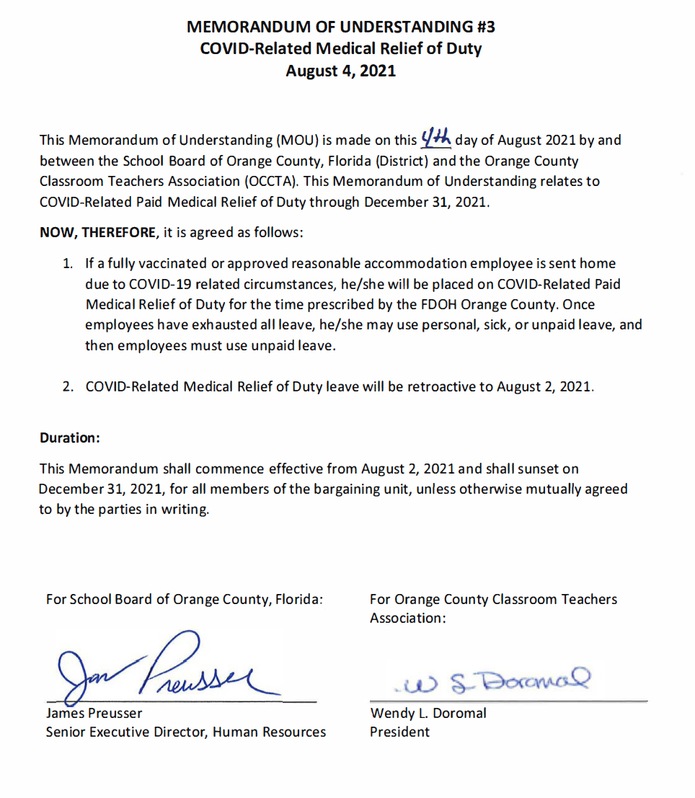 CTA's counter proposal handed across the table at 6:00pm. We will go back to the table at 7:00pm to hear the District's response and post it here. 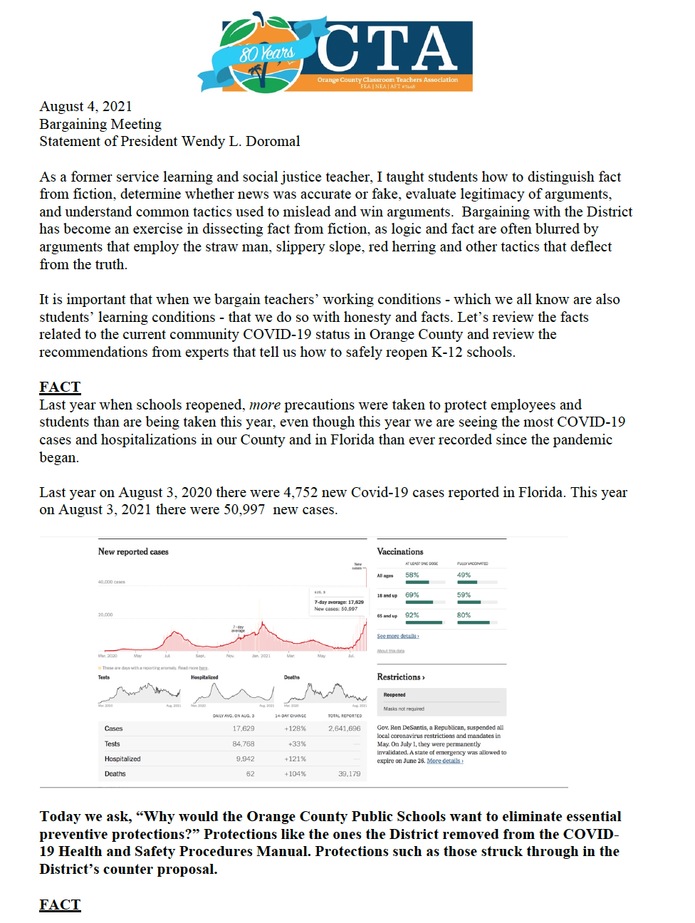 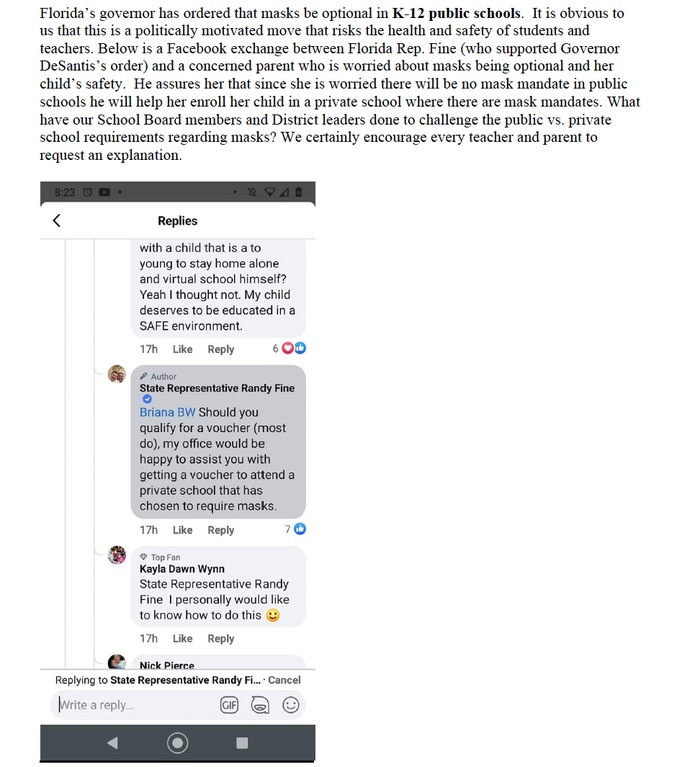 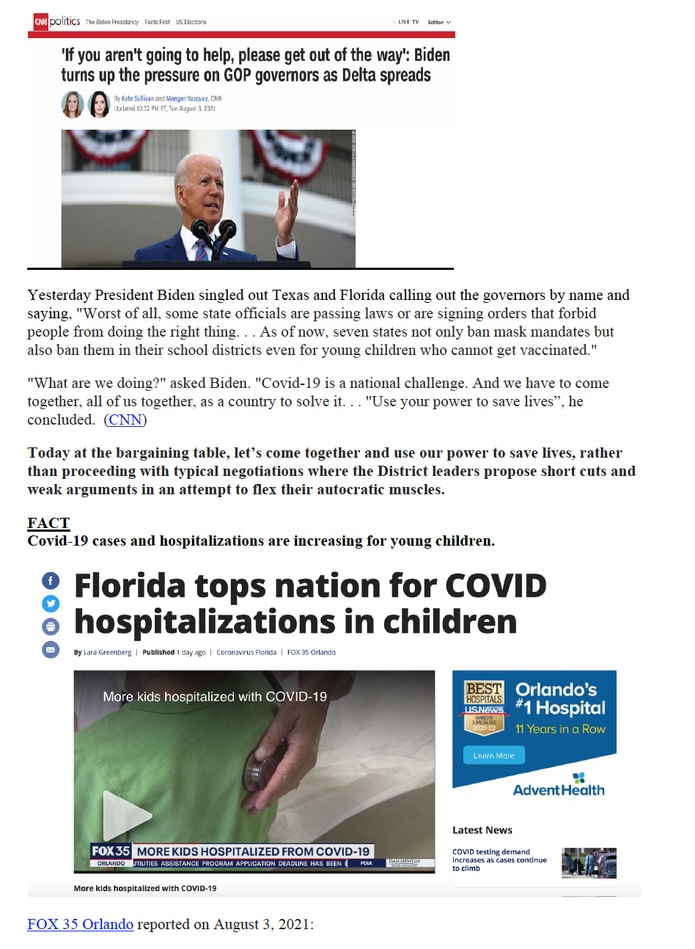 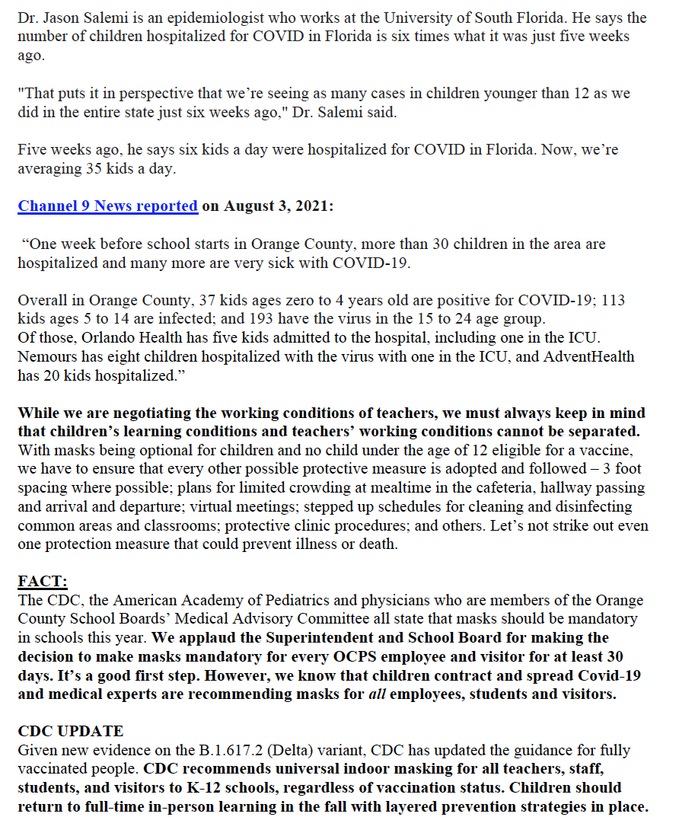 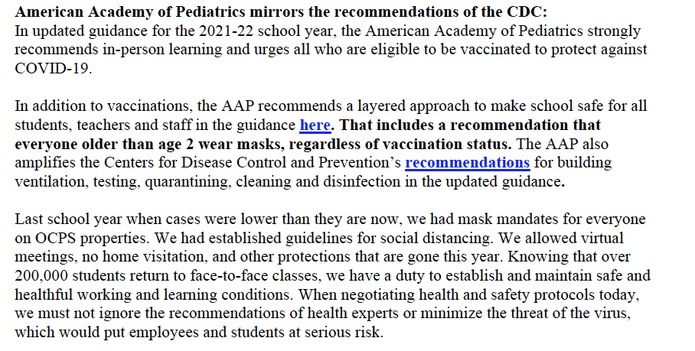 Impact bargaining of the pandemic-related health and safety issues began today and continues tomorrow. Despite CTA's pleas to bargain these issues before teachers returned to work,  the District pushed the date up until after teachers returned to schools and worksites.  They demanded a proposal from CTA before the meeting, supposedly so they could review it and have a counter proposal to us before the meeting. As always, they did not send the counter proposal to us prior to the meeting as they promised, but shared it in the session.  Below are the CTA and District proposals.

CTA objects to any language that includes the words, "when reasonable" or "when feasible", since it actually means the District will unilaterally decide.  Who would want that in an agreement!? And those boxes with their reasoning for changing our language - 'Need flexibility to respond to changes in the pandemic'! If there is language that should be revisited because of CDC recommendations or the amount of COVID-cases in our community, we should come back to the table to decide those changes.

This is about protecting students and employees. We are shocked that the District's counter proposal removes essential health and safety protections! Other District's have already signed comprehensive and extensive health and Safety MOU's because they want to protect teachers and students and provide some confidence and peace of mind to employees and students. Not Orange County!

After slashing essential protections from the OCPS COVID-19 Health and Safety Manual, what can we expect? Wasn't that a message that these elected school board members and District leaders refuse to prioritize health and safety?  The question is why? 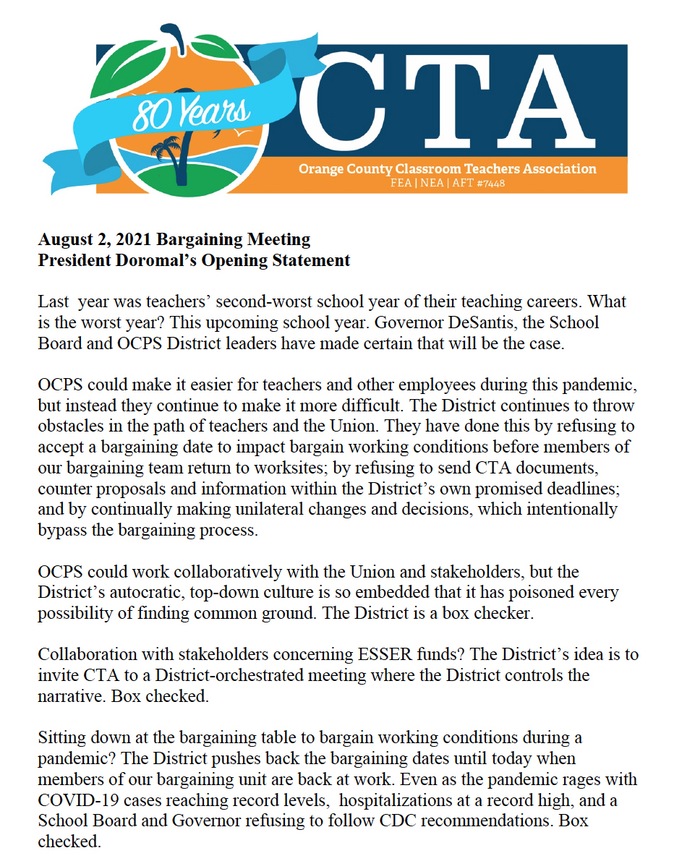 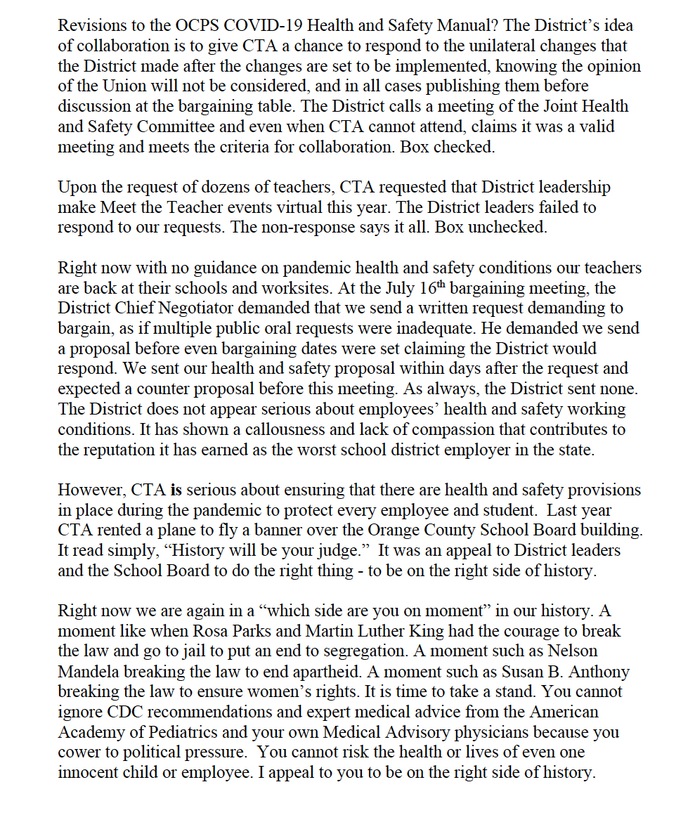 Today, OCCTA declared impasse. Every teacher gave so much this year, yet the District offered so little. The District's offer did not demonstrate that they respect, value or appreciate teachers. You are worth more!

We hope you will turn out for the School Board Budget Meeting on July 27th at 4:30pm to let the School Board members know how you feel about your employer not budgeting for teacher raises. You may also want to let them know that you demand safe and healthy working conditions as the school year begins. Please read more at

Thank you for all you do. We will continue to fight for you to have the salary and working conditions that you deserve. 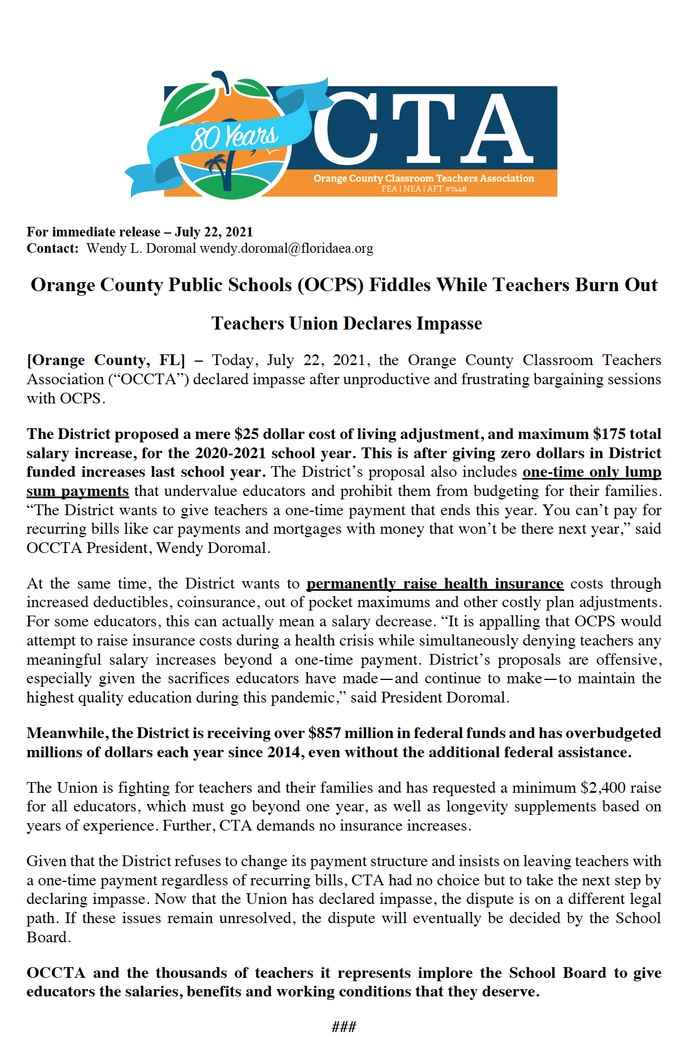 OPENING STATEMENT AND NEWS YOU CAN ACTUALLY USE

While teachers always look forward to the first day of school and are excited to meet their students, start teaching innovative and inspiring lessons and see their hard work result in student achievement, this year teachers also face the new school year with fear and trepidation.

CTA has demanded to impact bargain the health and safety issues related to COVID-19 since our MOU expires after summer school on July 31st.  The health of students and employees and lives are at risk, yet the District refused six dates that the Union offered to the District to bargain these issues. The District also refused CTA’s offer of bargaining these issues on any afternoon, evening or weekend. When does the District want to impact bargain the pandemic health and safety issues? It only offered dates after preplanning has started. What does this mean? It means that this District expects our teachers and students to return to schools with few safety and health procedures established

On July 19th, the District gave CTA their revised OCPS COVID-19 Health and Safety Manual dated August 2, 2021. We are shocked that the current manual was gutted, with 3/4 of the 80 original pages being removed entirely, and only a mere skeleton of protections remaining.  It is as though the District “leaders” decided that the pandemic is over. (It isn’t.) It appears that they decided to revert to numerous pre-pandemic policies and procedures, as if students and staff will be safe during this continuing pandemic with few protections in schools running at full capacity. (They won’t be.) The proposed revisions to the manual run counter to CDC advice, the advice of the American Academy of Pediatrics and even advice from members of their own Medical Advisory Committee. The changes violate our CTA contract language, which requires the District to maintain safe and healthful working conditions.

What was removed? Guidelines for social distancing, cleaning and disinfecting procedures, PPE, many clinic procedures, accommodations, flexibility to use sick leave to stay home if family members are sick and on and on. They even removed the line that said, “Monitor federal, state and local public health communications about COVID-19 regulations, guidance and recommendations and ensure that staff and students have access  to that information.”  CTA would hope that District leadership would want to be informed about the pandemic and want to keep all stakeholders informed with the most up-to-date and factual data. OCPS is after all, an educational institution. What did they add to the revised manual? A provision attacking employee absenteeism. Feeling safe and protected? Feeling valued and appreciated?

The District seems to have an abundance of time to send numerous emails, texts and robo-calls to members of our bargaining unit, directly dealing in an attempt to convince them to accept the District’s offer. But it seems they have no time to impact bargain so that we can ensure the health and safety of every student and employee.

Matt will be reviewing the content of the last email that the District sent to every member of our bargaining unit. 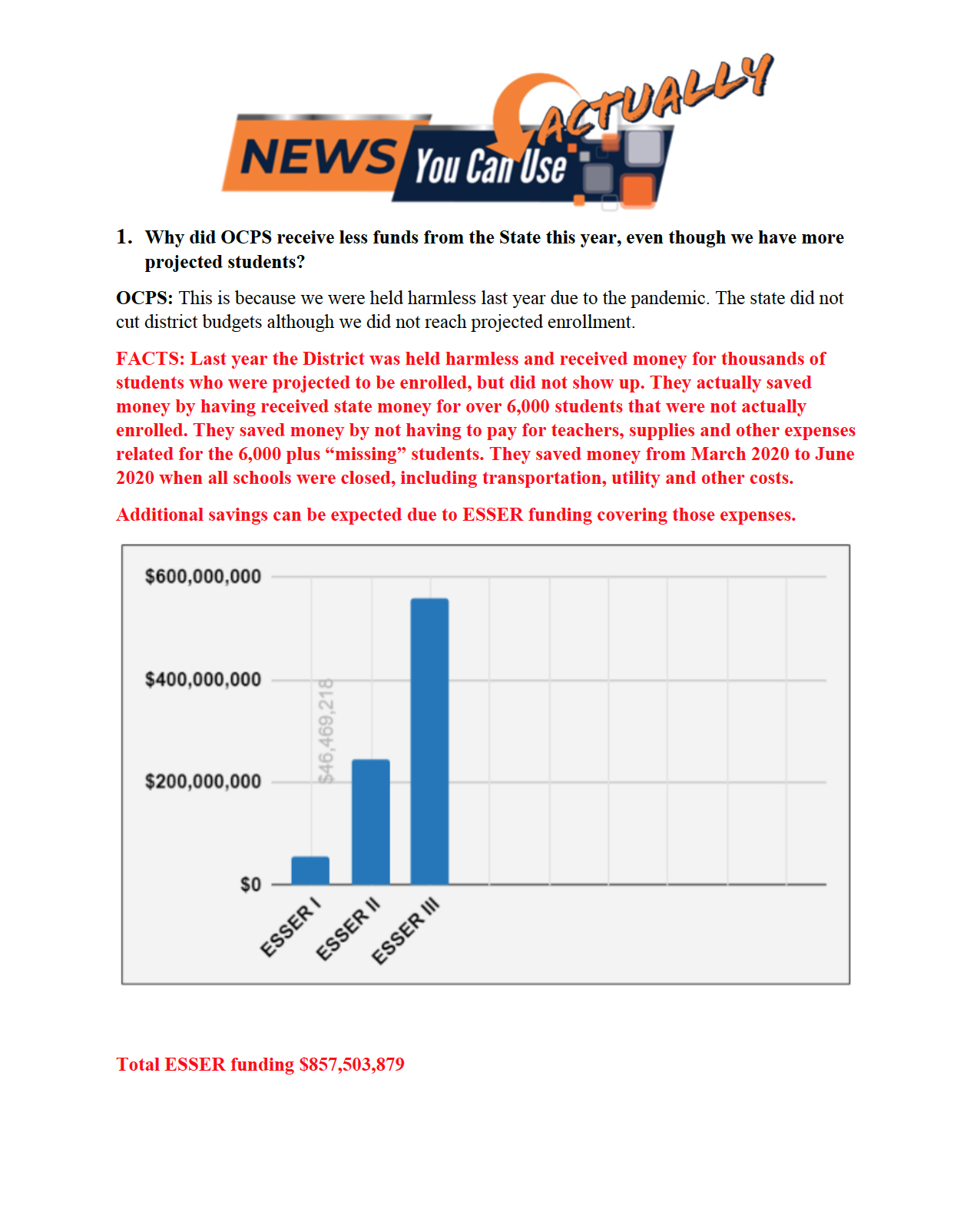 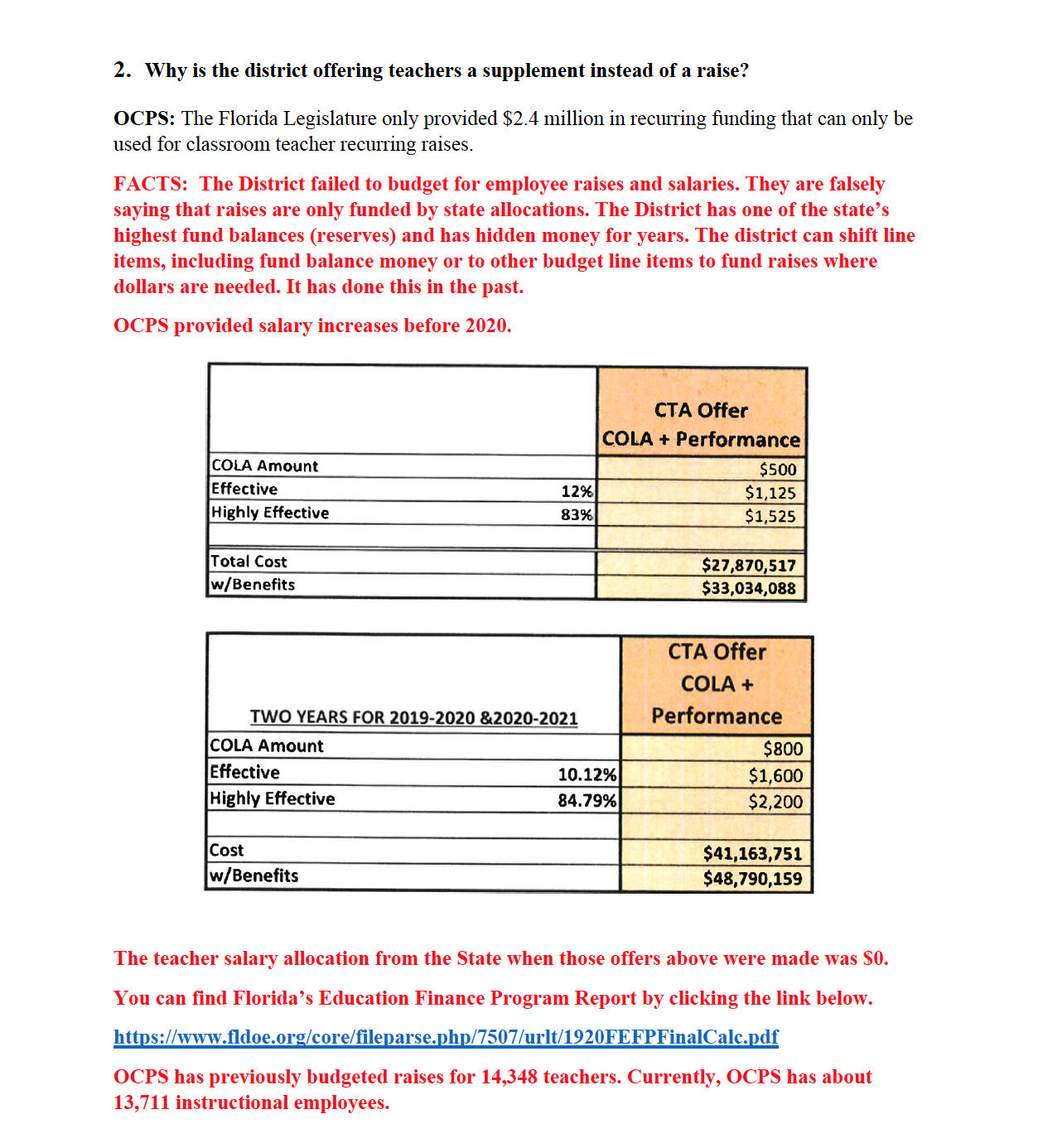 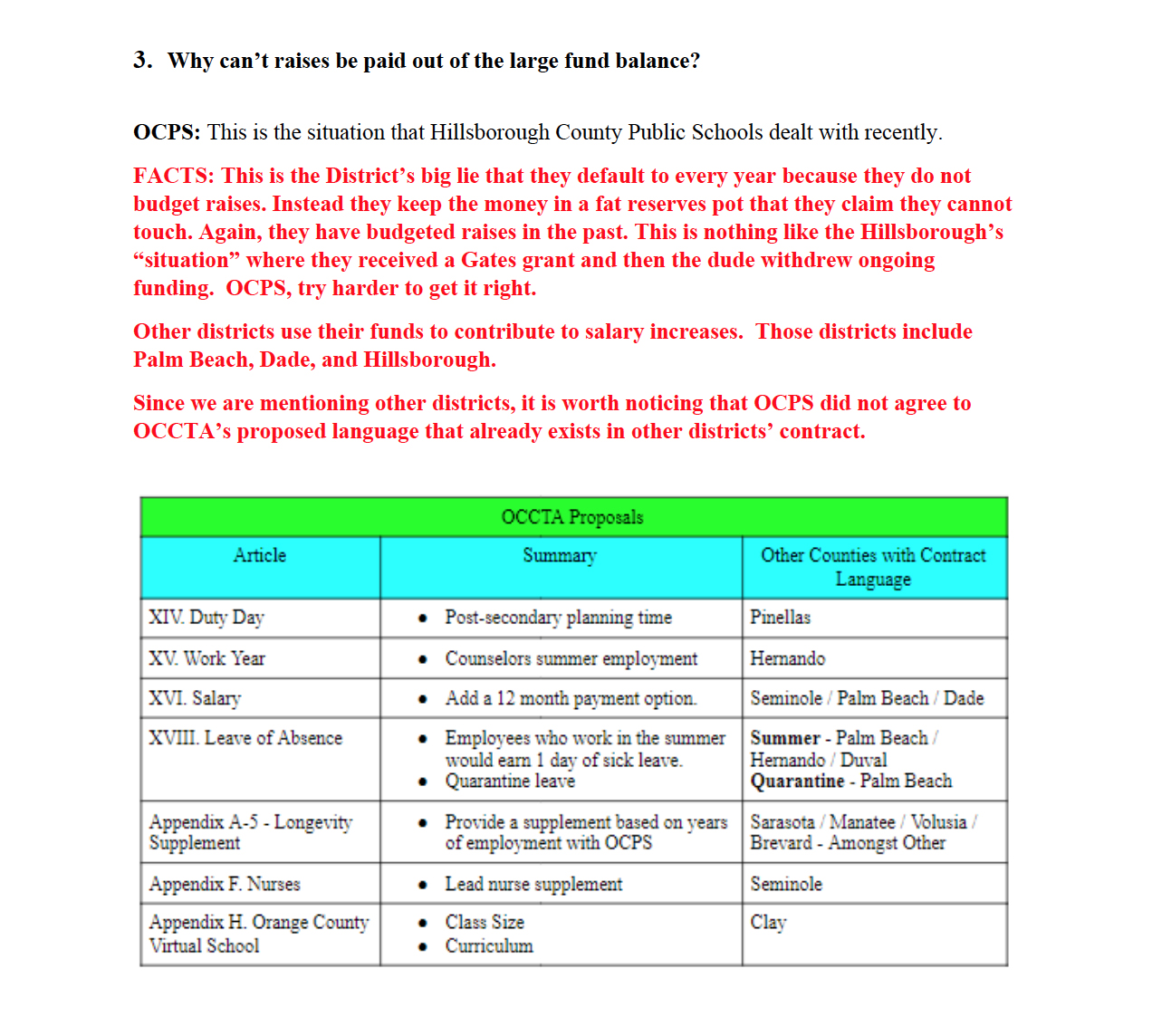 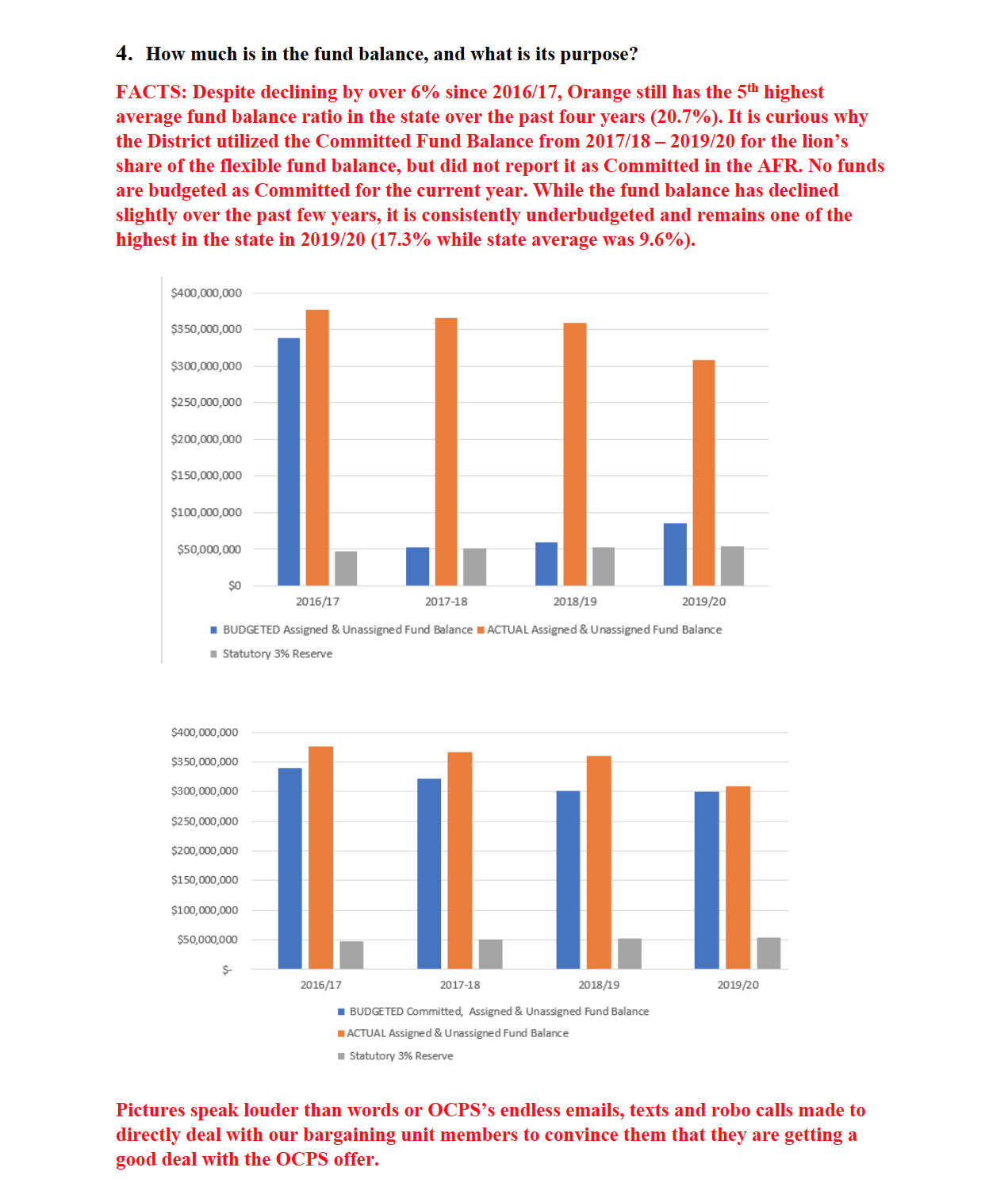 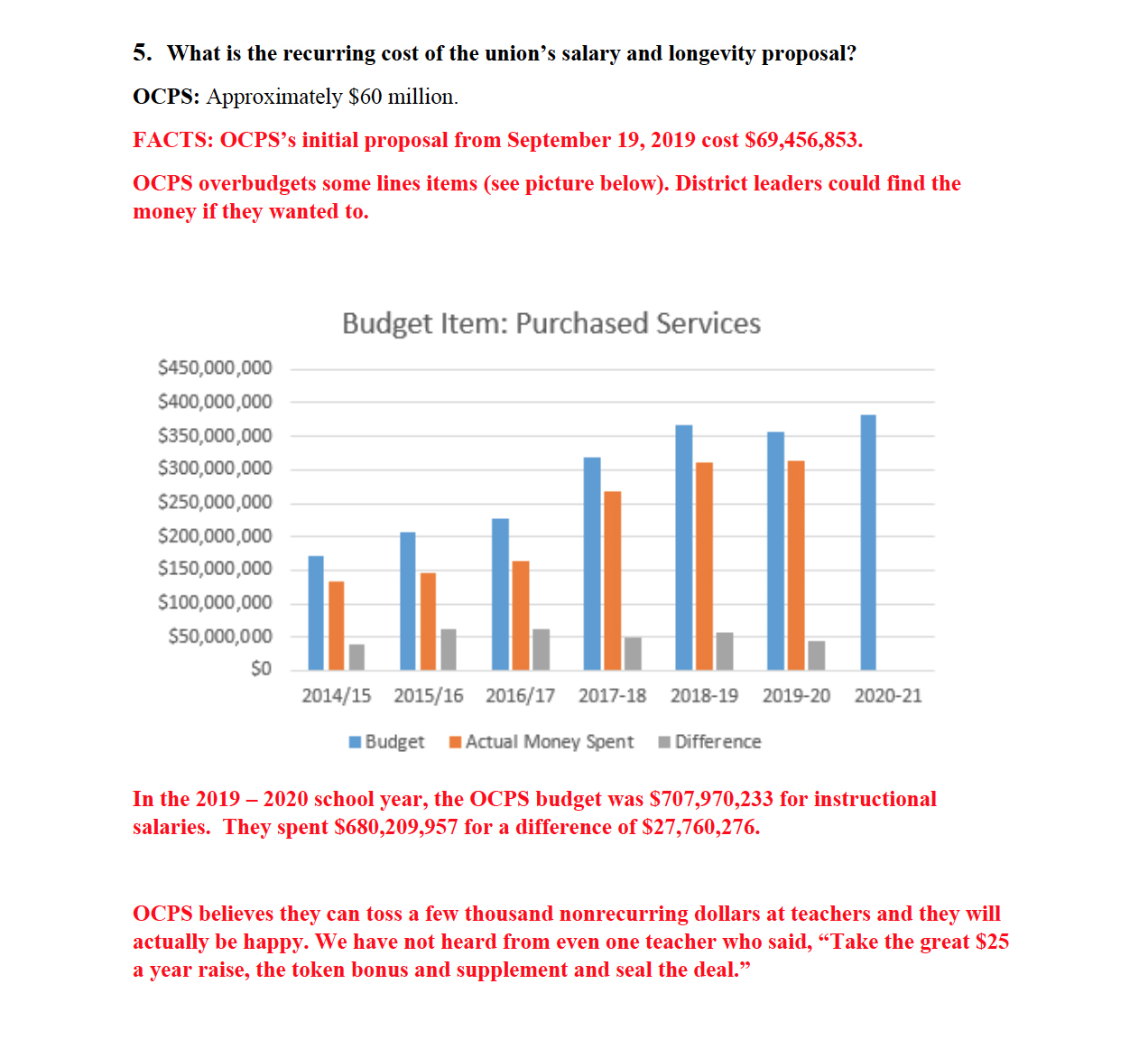 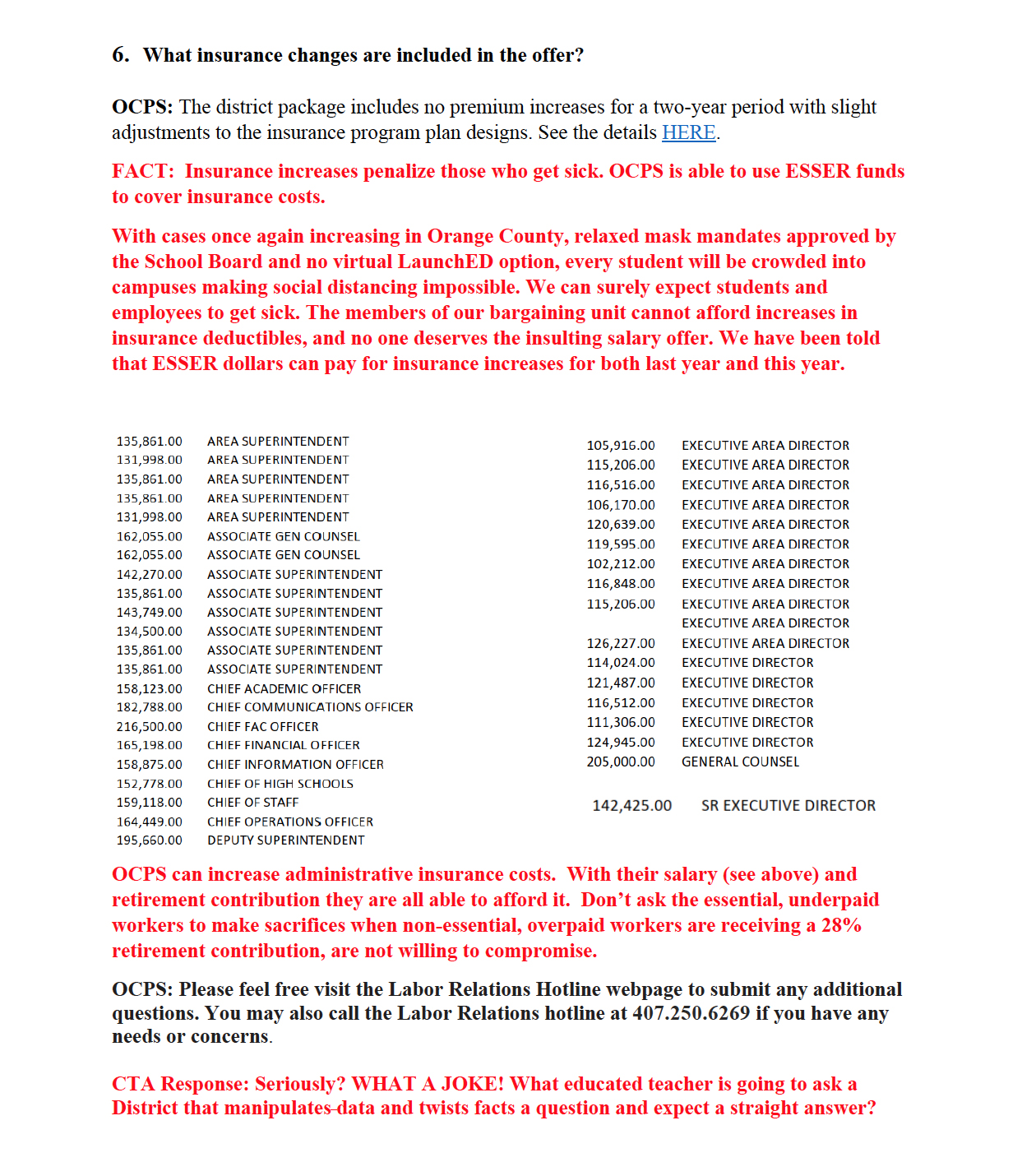 You can watch the morning and afternoon bargaining sessions on CTA's Facebook page: https://www.facebook.com/OCCTA7448 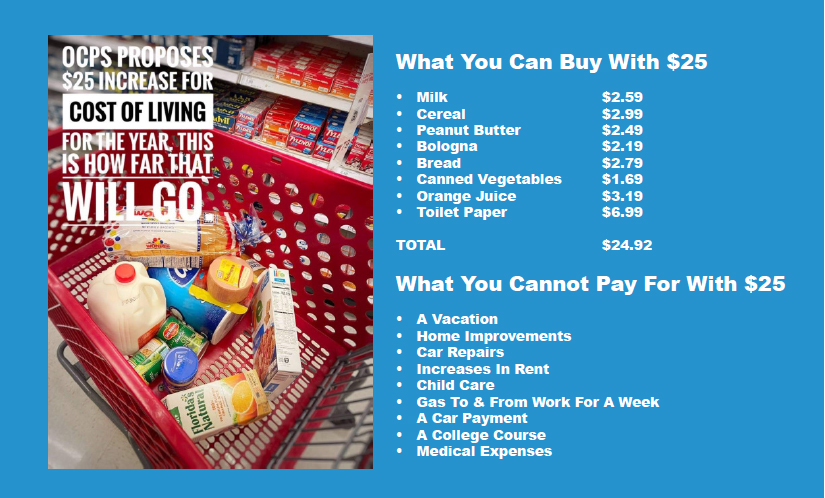 SALARY -The District rejected CTA's proposal and kept their insulting $25 base pay (COLA), an additional $100 for effective and an additional $125 for highly effective. The District claimed that is all the funding that they received from the state and the District had not budgeted raises for its employees.

Read their counter offer at this link: Download File (District Counter Proposal to CTA Proposal #6 -- Salary and Method of Payment v7.docx) All of the strike throughs represent what CTA proposed and the District rejected.

HYBRID TEACHING - The District struck through all of CTA's proposal for hybrid teaching, which basically stated teachers will not be required to teach both remote and in person students simultaneously The planning time applied to CTE instructors and the District also struck through main points.Download File (District Counter Proposal to CTA Proposal #8 -- Planning Time and Hybrid Teaching v3.pdf)

SUPPLEMENT FOR LEAD NURSES - The District rejected CTA's proposal to provide a supplement for lead nurses and modified other elements of the proposal. Download File (District Counter Proposal to CTA Proposal #13 -- Substitute Pay, Equipment and Supplies and Supplement for Registered Nurses v4.pdf)

BONUS FOR THOSE LEFT OUT OF THE DE SANTIS $1,000 BONUS - CTA's proposal was the same as the District's except for dates, which the District changed. Download File (District Proposal #4 -- Bonus -- FINAL.pdf) 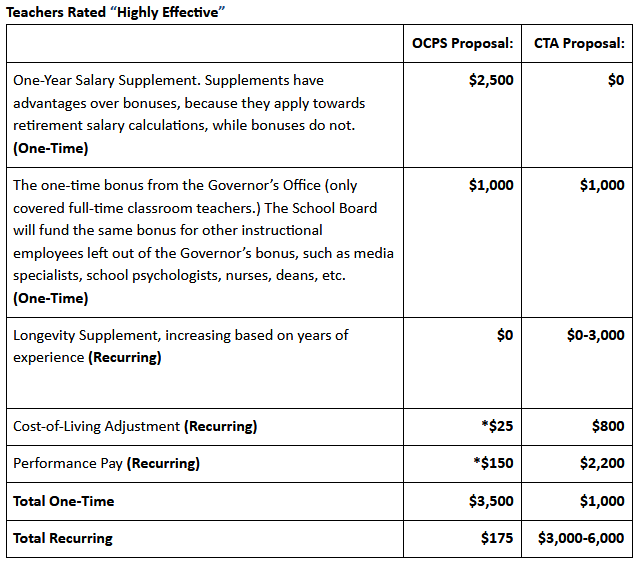 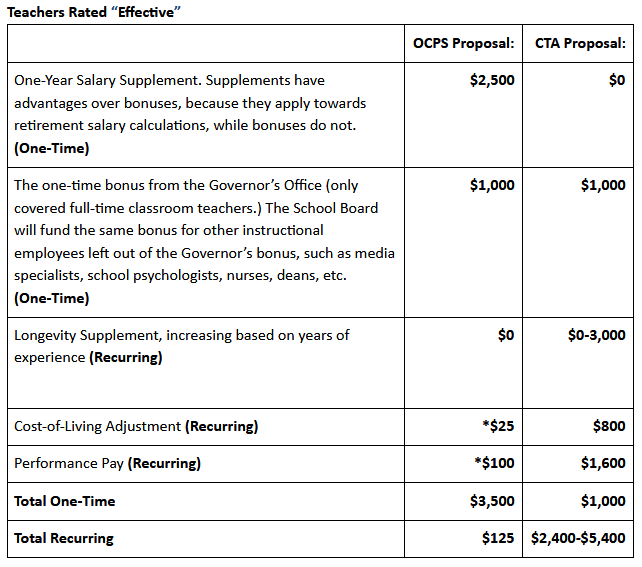 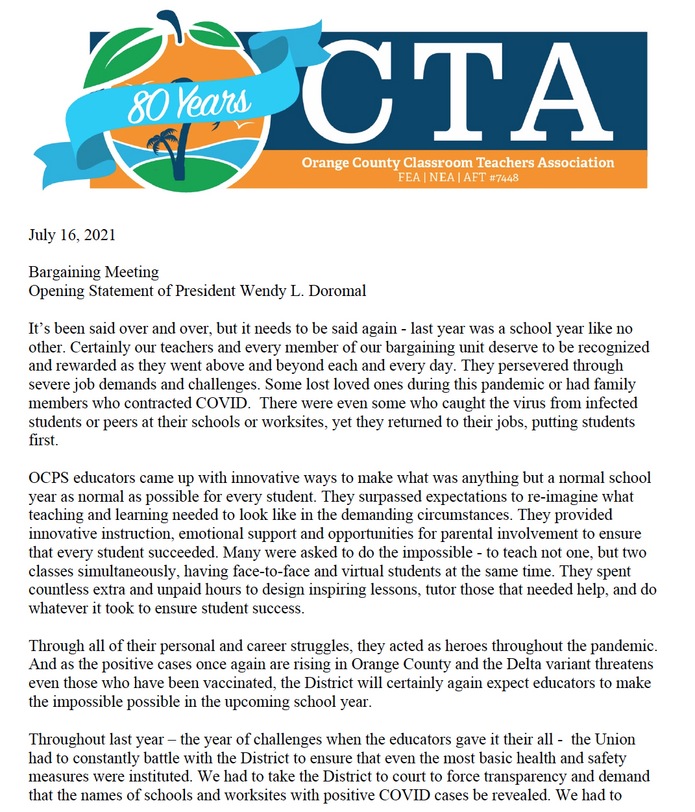 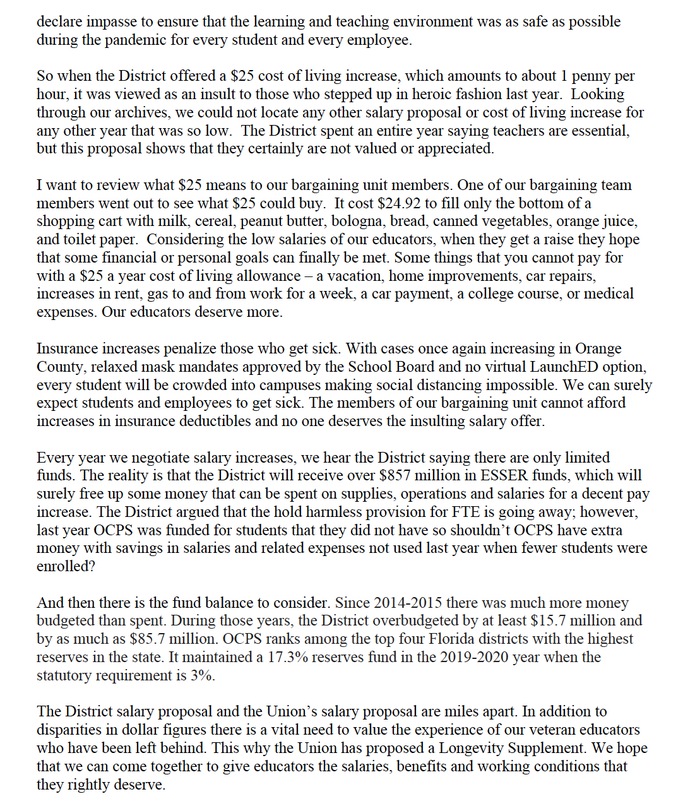 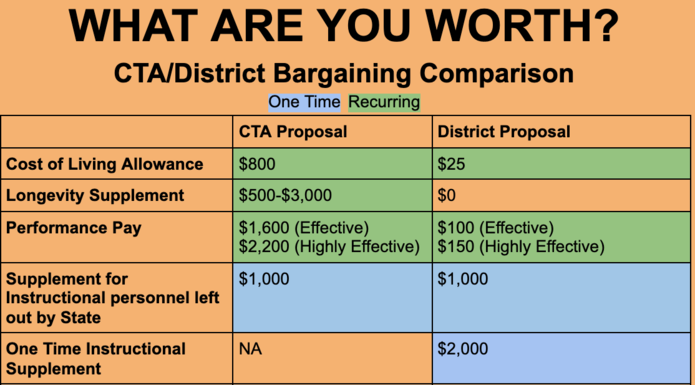